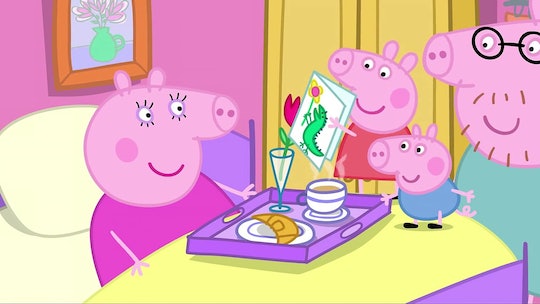 These 6 Signs Could Mean You're Actually Mummy Pig

Hey mama, I know you have a lot to figure out today. There are schedules to coordinate, meals to plan, annoying bosses (your children or otherwise) to deal with... in short, your to-do list is longer than a CVS receipt. But before you tackle all that, I have a very important question for you: Are you, in fact, Mummy Pig? Mummy Pig, as you likely know, is the matriarch from the children's show, Peppa Pig. And though she doesn't get quite the same fanfare as her wildly famous daughter, Peppa, Mummy Pig deserves a deep dive, and that's exactly what we're doing today because, #priorities.

As someone who has been watching Peppa Pig for years with my children, I admit I've never really given much thought to Mummy Pig. I think this is mainly because I'm only ever halfway paying attention to the show (hello, screen time is when we do all the things around the house, amirite?). But when I really started watching the show with Mummy in mind, I came to learn that she is one extraordinary lady, er, pig. Honestly, I need to know what parenting books she read, or which mindfulness podcasts she listens to, because this mama is one cool cucumber.

So whether you're a Peppa pro, or your little ones are just starting down the path of fascination/obsession with Peppa Pig (complete with their own Peppa-inspired British accents), turns out, there's a lot to glean from how Mummy approaches parenting. If you have any of the six traits below, you just might be a Mummy Pig yourself!

More Like This
The 4 Main Parenting Styles & Which Is Best For Kids
The “Tripledemic” Is Scary, But I Feel Less Helpless When I Wear A Mask
'Workin' Moms' Has An Official Release Date For Its Final Season
Moms, Just Eat The Fruit Dammit