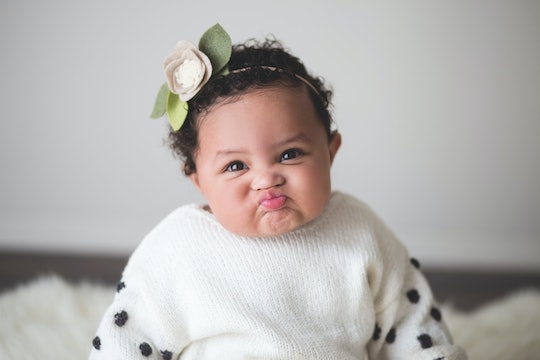 I am a mother of two, totally different children. In fact, they've been different since before they were born. My daughter was a difficult pregnancy, so I had every symptom known to woman. I also had a traumatic delivery, and she was born with the umbilical cord tied around her like an ivy. She refused to nurse. She has acid reflux, colic, and for months, she didn't know nighttime was for sleeping. She wasn't the most approachable baby, either. But moms with grumpy-looking babies know their babies, including the fact that they're not actually grumpy. In the end, they're just babies.

My son was a relatively easy pregnancy, and that pregnancy ended with a quick delivery and a nice recovery. He nursed like a champ, slept through the night, and was generally happy baby. Like I said: my children are night and day different. And now that my daughter is 8 and my son is 3, the differences seem exacerbated. My son smiles at everyone. He recently had an entire conversation with the cashier at the grocery store. My daughter, however, refuses to speak to people she's not completely comfortable with. In fact, the more people want to talk to her, the more she doubles down. And as a new, clueless mother, I was worried about her demeanor and what strangers would assume about her (and me) as a result of it. What if everyone we came across thought my baby was rude? Thankfully, it didn't take me too long to realize that was a ridiculous fear. I mean, my baby was just a baby. (Plus, refusing to engage or smile at strangers is not rude, but that's a discussion for a later time.)

My son still doesn't smile at stranger. And that's more than OK, because that's just the way she is. She is her own person, with her own temperament, and with her own ideas of how she should behave. No matter what I tell and teach her, she will do what feels comfortable for her. Because she is not an extension of me. She is herself. And in being herself, this is what my grumpy-looking baby has taught me:

More Like This
When Does A Baby Recognize Their Father? A Pediatrician Explains
Tips to Beat Jet Lag, For You & Your Kids
5 Superstitions About Babies Born On Valentine’s Day
The Best Travel Tips For Solo Parenting
What Parents Are Talking About — Delivered Straight To Your Inbox