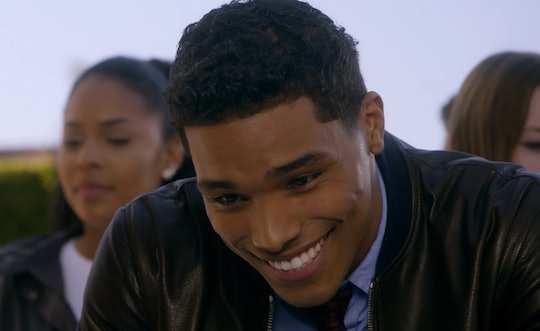 ABC's How To Get Away With Murder always has some incredible plot twist to keep fans guessing and this season's finale on Thursday was no different. At the very end of episode, viewers were introduced to a new character that Frank apparently knows and identifies him as someone's son. We just don't know whose yet, but fans already have so many Gabriel Maddox theories and how he fits into the How To Get Away With Murder family, even if some of them are a little outlandish.

After the episode, showrunner Pete Nowalk gave a couple interviews confirming that the next season will likely revolve around Gabriel's identity for at least a few episodes. He told The Wrap of Gabriel's character arc, "My instinct now is it’s gonna be a little bit of a mystery. It won’t be too long, but I think — you know, Frank seems to know who he is. But I don’t know who else does on the show. It’s going to be really fun to slowly — I want people to get to know Gabriel before we know his origins."

Since this show really likes to keep viewers on its toes with twists and turns, which means that Gabriel could literally be anyone. Here are some fan theories about who is he and what he's up to in Philadelphia.