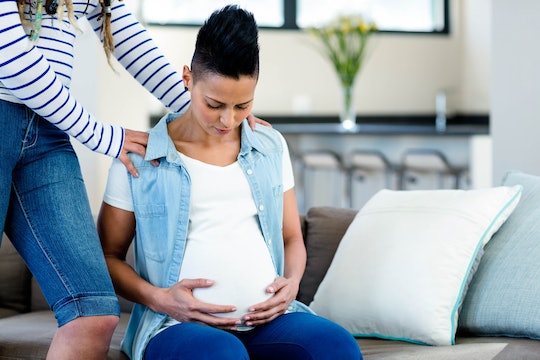 7 Infurating Things Your Partner Will Do When Your Water Breaks

I thought the moment my water broke would be dramatic and overtly obvious, with my partner rushing around the house grabbing insane things like a toilet plunger, the dog, and a record player. You know, like the movies. Turns out, and to no one's surprise, it was nothing like the movies. My water breaking was way less dramatic, and a lot more frustrating. It also gave me the opportunity become acquainted with the infuriating things your partner will do when your water breaks.

First of all, my water didn't so much as "break" as it "trickled," due to the fact that my amniotic sac had a little leak and needed to be punctured when I went into the hospital. Still, I woke up in the middle of the night to a giant puddle of my own making (that wasn't pee, mind you) and knew it was no ordinary leakage. I was a week past my due date so, to me, there was no question what that uncomfortable puddle was indicating. My husband, on the other hand, though the puddle was a sign that we needed to go back to bed. Not helpful, dear.

I drifted in and out of something loosely resembling sleep for a few more hours, at which point I contacted my doctor who said, "Yes, absolutely go to the hospital. Like, now." I told my husband, "I told you so." This still did not light any kind of fire underneath him. We took a leisurely drive to the hospital, stopping for a breakfast sandwich along the way while he made a few phone calls. In short, this was just one of the many ways in which the reality of my labor and delivery did not measure up to my fantasy (if you could call anything related to giving birth a fantasy). Luckily, my partner stepped up in the "dad department," shortly after the water breaking fiasco. In the end, I suppose it is a good thing that he was the one keeping it calm and collected (and, that egg sandwich was pretty freaking delicious), but that doesn't mean I wasn't a little bit pissed off.