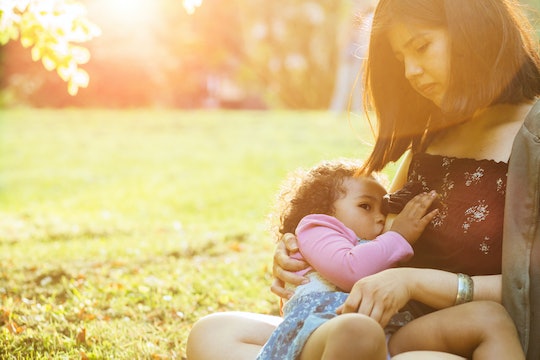 7 People Who Can Make Or Break Your Breastfeeding Journey

Breastfeeding can be a beautiful, wistful dream, or a horrid nightmare. Lucky for me, I had the chance to experience both. People, as well as circumstance, can make or break your breastfeeding journey, and each one of my journeys was so different that the only constant was, well, me. Sure, there were many variables that played into my successes and failures, but overall it was all up to me to either make it work or find an alternative. Breastfeeding didn't come "naturally" to me, either. In fact, it was a real struggle. The first time I nursed I lost that struggle, but the second time I persevered.

When I had my daughter, my firstborn, I had absolutely no idea what I was doing. I did not take any breastfeeding classes because I had erroneously assumed breastfeeding was a totally natural experience that all women can effortlessly do and, well, why would I need a class for something my body was designed to do on its own? Turns out, I should have taken that class. My daughter refused to latch, and after numerous attempts she and I were both screaming and crying. My nipples were bleeding, she was hungry, and after a week or so I gave up and started pumping. That's when the most hated relationship of my life began: the relationship between my breasts the breast pump.

My son was a different story, though. I knew all of the things I had previously done incorrectly, and all of the obstacles I was sure to face, so I was ready. My husband and I took a breastfeeding class, and were the only non-new parents in attendance. I came to the class with a single goal: learn how to get my child to latch. That's all I wanted. When my son was born, I insisted on the lactation consultant's undivided attention, too. I basically told everyone at the hospital that I planned on asking for the consultant as much as possible, because I had to learn how to breastfeed my child before I left the hospital and, well, there wasn't a lot of time. My determination, stubbornness, research, and willingness to prepare was, I think, responsible for my successful breastfeeding journey with my son. But I know I was not the only variable at play in my latest breastfeeding journey, and the people below can make or break that journey for any new mom hoping to nurse her child.