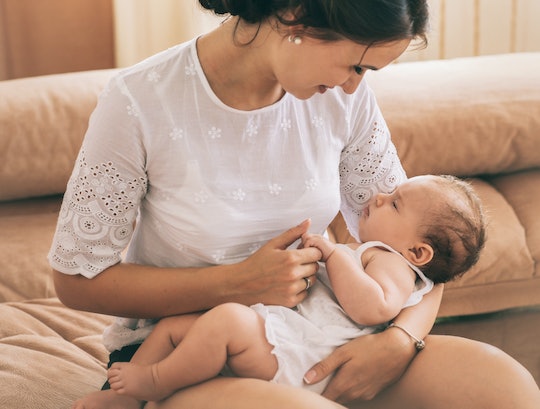 9 Horrible Ways To Respond To Your Baby's Nursing Strike

Thankfully, I had no problems breastfeeding my daughter when she was born. Then she went on a nursing strike and I panicked. It came, seemingly, out of the blue. One day she was nursing just fine, and then, that night, she did nothing but wail and refuse to eat. My husband and I had no idea what was going on. She wasn’t running a fever, she had napped for her usual three hours earlier in the day, but suddenly she was not only disinterested in eating, but totally distressed by it.

It was difficult to remain calm during this nursing strike of hers. The one thing I needed to do as her mom was to keep her alive, and I was apparently failing miserably. Our pediatrician ran through a litany of questions to assess her when we made that late-night call, but my daughter had no extraordinary physical symptoms. At a few weeks old, was she just f*cking with us?

There are a bunch of reasons babies go on nursing strikes, and in my daughter’s case, she may have just been showing the earliest signs of her soon-to-be-evident rebellious side. Thankfully, the strike barely lasted a day and just as suddenly as she stopped eating, she started again. She didn’t even seem that hungry when she decided to latch on again. The lack of explanation for this behavior frustrated me, sure, but I took it at face value and was simply thankful we were back to our usual nursing routine.

Though the incident was over nine years ago, it’s still fresh in my mind. It eviscerated me to see her so tormented by refusing to eat. In hindsight, I wish I remained calmer, if only to save the energy I would need when she started eating again. Instead, I pretty much responded to her nursing strike in the worst ways, like these: