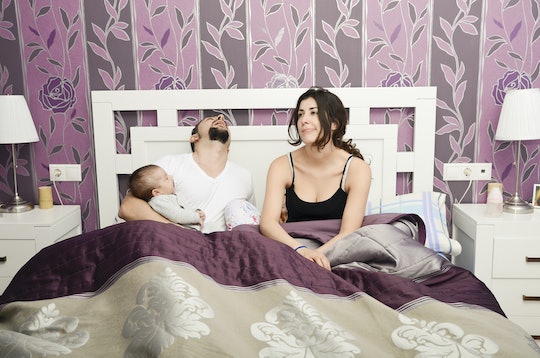 Exhaustion has been the number one contributing factor to our spousal spats once my partner and I became parents. We were the most low-key couple you could imagine; no relationship drama and zero shouting matches and absolutely no slamming of the doors or sleeping on friends’ couches after a disagreement. Once we added babies into the mix, and we stopped sleeping, our once innocuous bickering had a tendency to escalate rapidly. The most ridiculous fights we’ve had were due to lack of sleep. Not getting enough rest obliterated our patience and these days, with an 8-year-old and a 6-year-old, we manage to hold it together when dealing with our kids; we just run out of juice sometimes when we have to deal with each other.

I don’t expect our marriage to be fight-free. Not only do we live together, but my husband and I even work on the same floor. At the office, we are on our best behavior and we make it a point not to bring our family beefs to the job. But once we’re home, and we’re dealing with two kids who are talking over each other to get our attention while also ignoring our pleas to hang their coats up, our tolerance dips dangerously low. So, when I see my husband’s sweatshirt crumbled in a ball on the couch, I am not my best self having had just a few hours of sleep. If I were better rested perhaps I could calmly look away and gently ask him, out of the kids’ earshot, to please hang his sweatshirt up to set a good example. Without sleep? Well, without sleep I release the kraken. Over a sweatshirt.

In hindsight, these scuffles in our relationship are laughable because they’re over minuscule stuff that, in the grand scheme of having jobs and kids and a mortgage and never ending laundry, won’t ever matter. But in the wake of sleepless nights, when the kids wake up with nightmares or stomach bugs,or we’ve just stayed up too late to have some “me time” after cleaning dishes and packing lunches and signing permission slips, a wayward sweatshirt becomes everything wrong with my partner. Logic and maturity evaporate when exhaustion sets in, and some of the most ridiculous fights I could have with my partner ensue:

More Like This
What To Do If Your Toddler Keeps Taking Off Their Diaper At Night
What Parents Need To Know About Sleep Training & Breastfeeding
When Can A Baby Sleep On Their Stomach? Doctors Weigh In
Here’s Why You & Your Mom Can Fight So Much
What Parents Are Talking About — Delivered Straight To Your Inbox