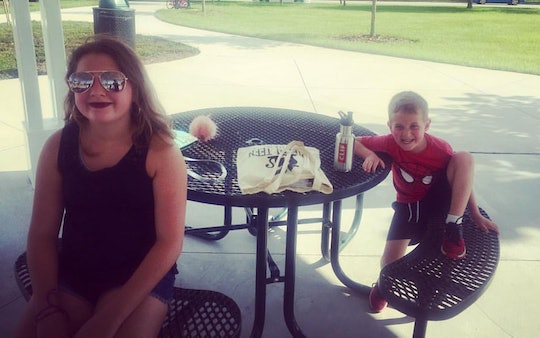 7 Reasons Helicopter Parenting Won't Screw Up My Kid, Thank You Very Much

I try to avoid any type of discussion that argues there's one "right" or "best" way to raise children. It's not easy to side-step these conversations though because, well, everyone has an opinion. And in my experience, a mom can only take so much before she starts tuning out all the unsolicited advice and following her own instincts; the very thing I'm doing right now. So believe me when I say there are more than a few reasons why helicopter parenting won't screw up my kids, thank you very much. Any commentary that argues otherwise is no longer up for consideration.

For the record, I'm not a textbook helicopter parent. Well, not anymore. But even if I was, so what? In my humble opinion, helicopter parenting gets a bad rap, but I'd much rather be "too involved" in my kids' lives than not involved enough. In fact, I wish my parents would have been more involved in my own life as a child, even if that meant hovering over my every move and being more protective than what others might consider "reasonable."

As a child I was neglected and often forgotten, so it's not lost on me that I essentially overcompensated when it came time for me to parent my own kids. In the end, I wanted to make sure my two children know, deeply and without a doubt, that they're loved and cared for. I also know my helicopter parenting hasn't harmed them. If anything, they're just as strong and independent as any other child I've come across — they just know mom is there when and if they need her. So with that in mind, here's some more reasons why I believe I'm doing a great job as a helicopter parent, and you won't hear me apologize for my choice to parent this way any time soon: