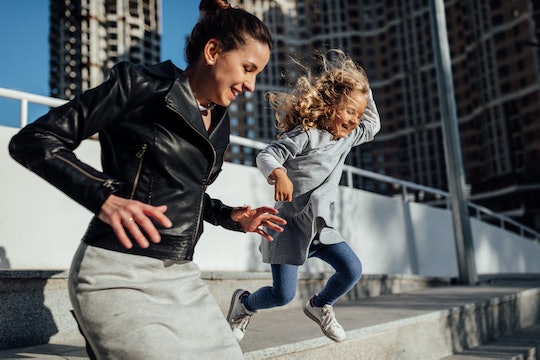 7 Stereotypes About City Moms That Are *Totally* True

Parents have a seemingly endless amount of choices when considering where to raise their children, and every choice is valid for a variety of reasons. For parents choosing that "city life," a proximity to cultural events, access to public transit, and a fast-paced schedule are just some of the positives to raising kids in a concrete jungle. There isn't a single parent that can avoid stereotypes though, and in the case of metropolis moms there are city mom stereotypes that are actually true.

While I haven’t lived in the City (read: New York City), I have lived in a rather large city all my life: Miami, Florida. And though I live in Denver, Colorado now, a smaller city, I still consider myself more of a city person and, since I'm a parent, a city mom. I’ve always enjoyed the energy of a city, too. I love to people watch, I enjoy going to museums and concerts, and I am, frankly, not very much of an outdoors person. And if you're keeping track, that's a stereotype, stereotype, and yes, another stereotype — all pretty accurate.

While I like hanging out in the mountains or at the beach, I could never be convinced to move too far away from the hustle and bustle of city life, and I know I'm not the only city mom to feel that way, either. So with that in mind, here are a few other city mom stereotypes that are pretty accurate: