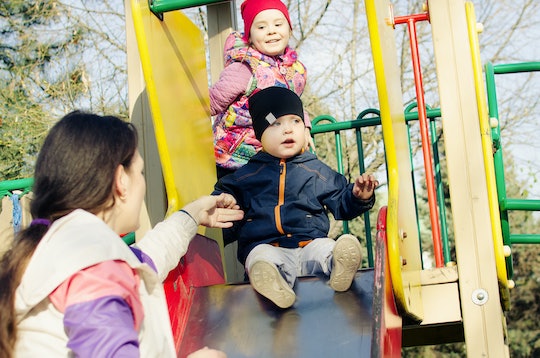 What I Want Strangers To Tell Me About My Kids

When strangers talk about my kids it is usually to judge me or warn me. "He's burning up," for example, was a comment I received when my older son refused to take his hoodie off in 100 degree weather. Other times it would be, "Your kid has a lollipop," like I wasn't aware of the candy my kid eating before school started in the morning. It is rare that I want to hear a comment about my parenting, but when I do, there are a few things I want strangers to tell me about my kids.

Honestly, I'm just trying to do my best while simultaneously attempting to drown the screams of negativity coming from inside my brain that constantly tell me I could be doing way better as a mom. When strangers bring to my attention all the ways I have "failed," even if its just via the evidence of an un-wiped runny nose or some playground folly, it hurts. I feel the pressure to get every parenting decision right on the regular anyway, and certainly without the feeling that I'm being judged and watched by random people at the supermarket, playground, or wherever the hell else I might find myself on a random day.

In other words, it's a rare gift when a stranger tells me something nice, or even just something helpful about my kid. A gift that, at least for me, definitely doesn't go unnoticed. After all, it does take a village, doesn't it? I wish more tell me these kinds of things about my kid, instead of pointing out some perceived flaw that's only going to make me (and maybe even my kid) feel bad: