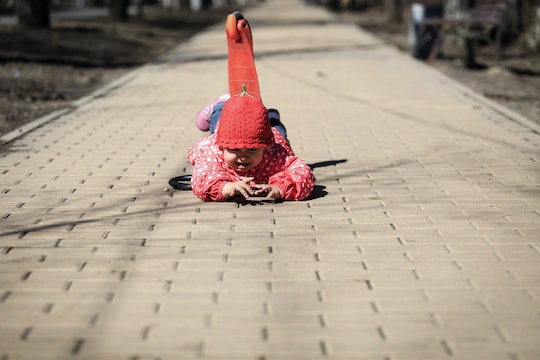 What Your Toddler Learns When They're In Pain

Moms do everything they can to keep their kids safe. However, as children grow from defenseless newborns to defiant toddlers, they grow more reckless and are exposed to more risk. While you can "kid proof" your home to your heart's content, it's impossible to 100 percent protect your kid from every potential accident. Thankfully, however, there are some good reasons for allowing our children to experience an "owie" or two. In fact, there are things your toddler learns when they accidentally hurt themselves, so most accidents truly aren't the end of the world but, instead, a teachable moment.

I have always been a more hands-off parent when it comes to allowing my son to explore the world. I would rather him run and fall, than never run at all. This attitude has earned me some sly looks from other moms on the playground, but it has also given me an adventurous child who is physically active and bold. I think it's a fair trade.

In my humble opinion, parents need to strike a balance between allowing their children enough room to play and jump and roll around, while simultaneously doing their best to aid their child in avoiding serious damage. The Center for Disease Control and Prevention (CDC) reports that an estimated 12,175 children die each year in the United States from an unintentional injury. No parent wants their child to be hurt or to become a horrifying statistic. However, as long as your child keeps the injuries to nothing more than a few scrapes and bruises, those injuries could become a teachable moment and your toddler could learn the following lessons: