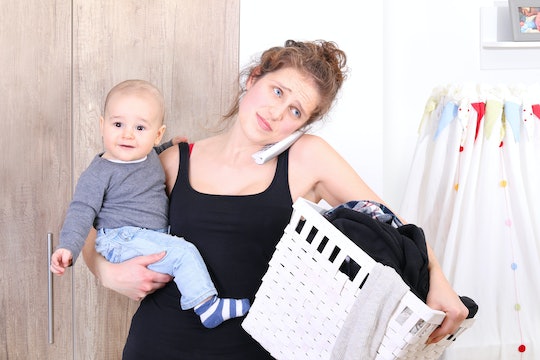 I've struggled with insomnia since I was a pretty young kid, so I know what it's like to be tired as hell. I honestly only started sleeping soundly and fearlessly through the night about a year before I started having kids. Yeah, that timing sucks. I finally found out why people loved sleep so much, and then it was ripped from my grasp. I miss my newfound buddy, sleep. So I've invented six ways to be productive while you sleep standing up, because if you're a mom you've probably already learned that the new-mom life is no laughing matter.

Now, I won't say these are for everybody. Sometimes you need to just call in some back-up so you can get an actual full night's sleep. But if it's one of those days that back-up's not available, or you don't want cash in those babysitting favors until you absolutely need them — like when you start having sleep-deprivation induced hallucinations — then you might want to give some of my inventions a try.

I have three kids now so one might say I'm somewhat of an expert on sleeping while standing up. OK fine, I am the only one who says that. Still, my kids think I'm pretty smart so you might as well take a gander at these goodies: