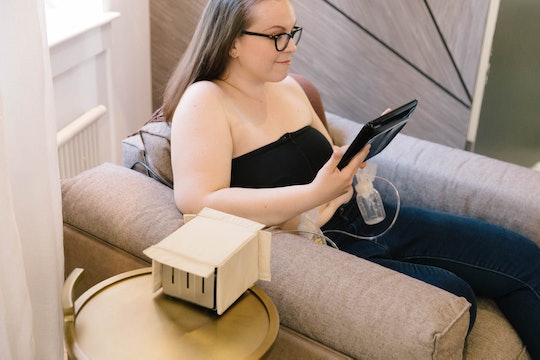 8 Horrible Things Your Coworkers Will Do When You're Pumping

Being a working mom is like being a circus performer. You need flexibility, skill, athleticism, and the confidence to be OK with being occasionally stared at while you contort your body into weird positions. So many employers claim they'll accommodate your needs when you return to work, but then you get back and learn there are so many horrible things your coworkers will do when you're pumping — no matter what the official "rules" say — that can make your experience suck (no pun intended).

For me, returning to work after maternity leave was stressful and emotional. Then I had to figure out how I would go about pumping in my workplace. I did it, though. I brought my pump and extra bottles and the first thing I did after walking in the door was ask about the logistics of breast pumping. "Don't worry," our receptionist said. "We are a breastfeeding-friendly workplace." I soon discovered the company was playing it fast and loose with the word "breastfeeding-friendly," though. Collecting milk for my newborn was so different in practice than it was on paper, and my co-workers were horrible during the entire experience.

When I gathered my supplies to attempt my first pump at work, I discovered that people were having a meeting in the designated pumping room. They glared at me and audibly sighed when I asked if I could use the room. I returned to my office with rock-hard boobs, and put the sign on the door that our receptionist provided (complete with a picture of a cow, you guys, because that's not degrading or anything). I discovered that some of my coworkers thought "do not disturb" meant "knock louder." As time past, I had to get used to someone glibly asking me what I was "doing in there," followed with a wink, at least once a day. I tried talking to Human Resources about it, but learned that jokes about my boobs aren't sexual harassment when pumping is involved. Ugh.

There are so many reasons why pumping at work sucks, even if you are privileged enough to have time and space to do it. For me, my coworkers were at the top of that list, and in the following ways:

More Like This
101 Advent Calendar Activities, From Books To Read To Cookies To Bake
The Best Black Friday 2022 Deals For Moms
The 4 Main Parenting Styles & Which Is Best For Kids
41 Strong & Sweet Baby Boy Names That Start With “K”