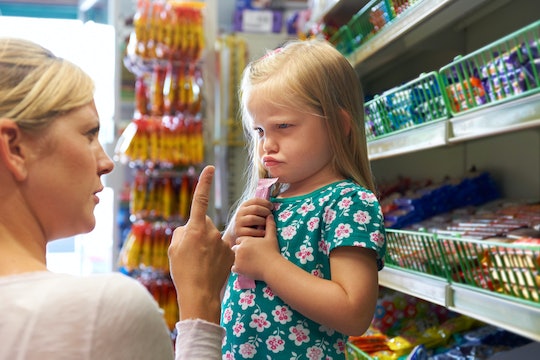 8 Names I Call My Kid Besides Jerk, Because Sometimes Kids Are Jerks

It's 2:00 p.m., you've just settled your 2-year-old toddler down for a nap, and you've closed your eyes for some necessary down time. But your kid isn't asleep. No, they've removed the door stop and are scraping the wall with it whilst making barnyard animal noises. To put it nicely, they're being a "naughty noo-noo." Only that's not the word that comes to mind. If you're a profanity-prone parent, never fear. I've developed this handy list of names I call my kid so that I don't call her, well, an asshole.

I'm a sweary mom. In the past, I've always been fairly unapologetic about the fact. But now my daughter is pushing 3 and has started to mimic everything I say. The first time she dropped her toy and said, "Sh*t, Elmo!" I definitely laughed out loud. My husband, however, was not quite so amused. I'm trying to temper my language, but it's hard because, well, I have a temper. My kid frequently infuriates me, but I'm not going to call her a jerk (at least not to her face). However, sometimes she really is being a butthead, so I've had to get a little creative.

To be clear, I am not advocating verbal abuse. I would never call my child fat, lazy, or stupid and am aware of the negative effects of that kind of name-calling on her self-esteem and behavior. I recognize that I may also be writing her an engraved invitation to call me a "meanie-head poo-poo butt." But sometimes I'm just at my wit's end, and if I'm going to call her something I'd rather it be one of the following than any of the more obscene options in my personal arsenal: