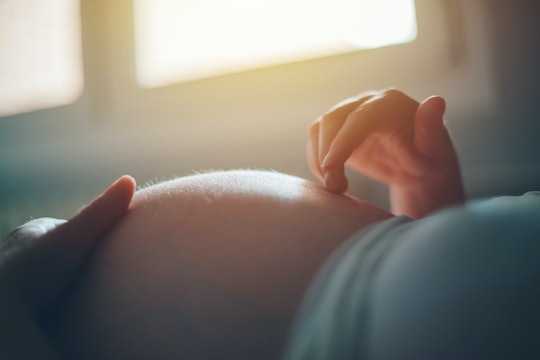 8 Second Trimester Moments That Prove You're A Badass

People always describe the second trimester as the "easy" trimester. In my experience, though, and while it was the least offensive of the three, it's anything but "easy." Sure, for the most part, you'll likely be past the nausea and exhaustion part of early pregnancy. And, yes, you'll probably haven't reached the "I am so done being pregnant" stage yet. But, guys, as someone who's been pregnant three times, I can tell you that there are plenty of second trimester moments that prove you're a badass. Because when it comes to pregnancy, in general, there's not a single moment that can qualify as "easy."

For example, your second trimester is generally a time for growing and showing. As your baby grows, you'll be forced to wear maternity pants, or resign yourself to life in leggings and sundresses (like I did). As you start to show, people will start to comment about your pregnant body, saying things like, "Are you sure you aren't having twins?" and, "You look like you are about to pop." Yes, you deserve a medal for not punching them square in the nose. And don't even get me started on the people who will touch your stomach without permission. They deserve their own special level of hell, preferably far, far away from pregnant people's bodies.

On the bright side, you might actually get some of your energy back in the second trimester. Of course, in my experience, if you decide to actually go for a run or attend yoga class during your second trimester, a member of the pregnancy police is likely to try to issue a citation. My main advice for surviving the second trimester is to try to enjoy it, at least as much as you can, and take stock of the many moments that prove you are a total badass, and bound to be an awesome mom.

More Like This
Meghan Trainor Shares Baby News After Dropping Hints On TikTok
22 Valentine's Day Pregnancy Announcement Ideas Sweeter Than Candy
Fun, Sexy Maternity Lingerie, For When The Mood Strikes
Sweet Names For Brothers That Aren’t Too Matchy-Matchy
What Parents Are Talking About — Delivered Straight To Your Inbox