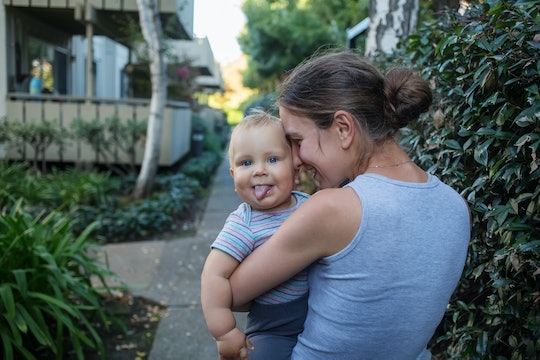 8 Stereotypes About Raising Boys That Are *Totally* True

When I first heard I was having a boy all I could think about were stereotypes. I was afraid my boy would play "rough" and pick on girls he liked. I was afraid he wouldn't want to spend time with me because I'm not really a "sports" mom and I would have to trade all the Barbies my daughter played with in for a stash of cars, trucks, trains, and superheroes. Turns out, I had nothing to worry about and most of those outdated platitudes were false. But there are some stereotypes about raising boys that are totally true, at least when it comes to my son.

More Like This
Here's The Deal With Babies Who Sleep With Their Eyes Half Open
30 Vintage Photos Of Parents Giving Their Babies A Bottle
5 Signs Your Baby Is Too Cold
Is The Tooth Fairy Real?

My son is sweet, sensitive, and probably a bi-product of a semi-overprotective mother who loves him more than words can express. He does likes sports, but he also loves playing with his sister's dolls. He's usually gentle, not rough, and he plays with anything that interests him — not just superheroes, cars, and trucks. He doesn't pick on anyone, regardless of their gender or regardless of whether or not he "likes" them. He's emotional and strong, practical and creative, and he loves to pick out his own clothes. Sometimes he does do and like stereotypical things, but it's not because he was "destined" or "designed" to. Instead, it's simply because he's a curious kid trying to learn and grow and figure out who he is.

As a culture we've come a long way in combatting sexism, and it's clear we should continue challenging gender stereotypes and creating a safer, more equal society for our children. Part of that work is refusing to treat babies or children or young adults or people any differently simply because of their sex or gender. All those stereotypes I was initially worried my son would embody are all the result of, I believe, little boys and little girls being treated differently. But every once in a while my son does exude some stereotypical boy behavior, and I have to be that stereotypical "boy mom" as a result.