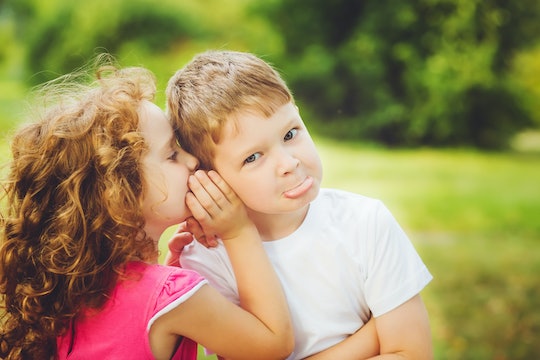 7 Ways To Teach Your Son To Listen To Women

Helping young children become good people takes deliberate work. The unfortunate truth, though, is that thanks to our society's deeply ingrained culture of misogyny, a lot of that work needs to be targeted. So as a feminist mom of sons, you may find yourself on the lookout for learned behaviors that don't jive with your values. Since girls and women so often get spoken over and interrupted, I'm going to assume you'er trying to to think of ways to teach your son to listen to women. This is only part of the picture, of course, but the ability to truly listen is a vital part of becoming a compassionate, empathic, and sensitive person.

I get that some will assume I'm biased against boys. The very premise of the title of this piece implies that without being taught, boys would naturally veer towards not listening to women. (As a mom, I feel like kids of both genders have some trouble listening to their moms, but that's besides the point). As a mother who adores her two boys, I don't believe a tendency toward not listening to women is inherent. I recognize that there are cultural and societal forces that seem to be working against my greatest efforts to create the kind of loving, feminist, and respectful men I hope to raise.

I also know that besides the influence of outside factors, I'm part of the problem, too. Sometimes I let my sons order me around, sometimes I succumb to them climbing on me or touching me after I've told them no, and sometimes I let it slide when they are ignoring something I've said or asked for again and again. My being permissive, and not making them truly listen to the main female role model in their lives (ahem, me), sends a message to my sons that my voice is one that doesn't need or deserve to be heard.

So with that in mind, here are some ways I think we could all work on making things a little better for the girls and future women in our sons' lives: