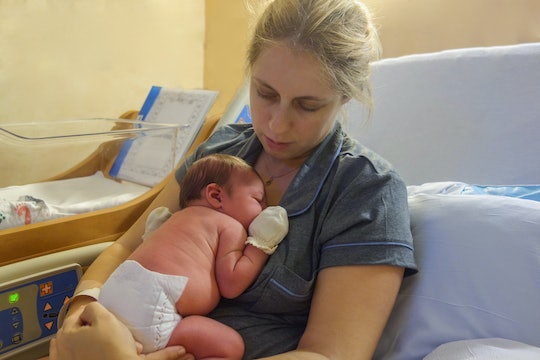 8 Things Moms Beat Themselves Up About, But Shouldn't

When my daughter was extremely small, it took me several months of exhaustion to realize how product-oriented I am. I'm not one of those people who enjoys the process, or who can look at things and appreciate incremental change. I see things, baby included, as success versus failure. So in those early weeks and months, there seemed to be a heck of a lot of failure. However, most of those are very natural things new moms beat themselves up about, but really shouldn't.

When you have a tiny newborn (especially when it's your first tiny newborn) to take care of, everything to do to keep them alive can make even the slightest mistake feel like the end of the world. If they don't feed well or don't sleep enough — heck, if they don't poop enough or poop too much — it feels like it will make or break your child's health and potential future. In reality, there's a whole spectrum of "OK" situations your child could present you with, and just because those situations may not be what some baby book specifically outlines doesn't mean your child isn't progressing.

After a few months with our daughter at home, I realized that she only yawned or acted tired well after she was exhausted. She was a party animal with some serious FOMO and wasn't going to let us know she needed to sleep when she really freaking needed some sleep. We also realized that she needed a lot more sleep than the books told us she would. She was taking three naps everyday for several months longer than any book explained. However, once I stopped judging her based on the books or even friends' experiences, my version of success greatly improved.