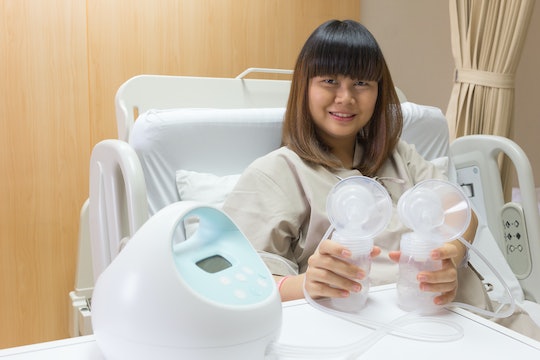 8 Things No One Will Tell You About Your Breast Pump, But I Will

As someone who pumped up to six times a day with each of my two boys, in addition to nursing, I consider myself a hard-core breast pumping veteran. Looking back, I know that six times a day was excessive, but I tend to veer towards excess. It's a flaw, I admit. However, as a result I'm acutely aware of the things no one tells you about your breast pump. After all, you kinda have to find out for yourself, through half-hearted attempts and trial and error and experience. Thankfully, experience with a breast pump is something I have in spades.

Prior to actually pumping, I had heard the best time to pump was first thing in the morning. So, of course, that's what I did, usually after nursing my son right after he woke up. Then, while he sat in his bouncer and screamed at me, I pumped and drank coffee (my version of a baby latte). His babysitter came around noon, at which point I pumped again, because I was afraid we would run out of fresh milk should he become insanely thirsty and drink all the reserves I had already left in the fridge. Then I'd leave for work, and bring my entire breast pump bag with me which, by its description, you would think is some magical contraption that not only pumps your milk but also complements your supply and maybe does some of the set up and clean up for you. I would pump in the afternoon because if I didn't my breasts would explode, which meant I would have to find a public bathroom and make a spectacle of myself, because most public bathrooms in New York are rather small and intimate affairs. By 5:30 I would go home, and if the baby was too hungry to wait for me he would have already eaten, so I would have to pump yet again to relieve the pressure.

So, you see, it was a never-ending cycle. I pumped for a very long time with both of my kids and, it turns out, it's a hard habit to kick. Taking care of and washing all the little parts necessary for your pump to work, and the process of storing the milk my body produced, made me feel like I was taking care of my babies. Even though it can be a pain in the ass, there is something comforting about the routine of it all. So, I leaned in and made that routine my you-know-what and, in the process, learned a few things about breast pumps that every breastfeeding mama should know: