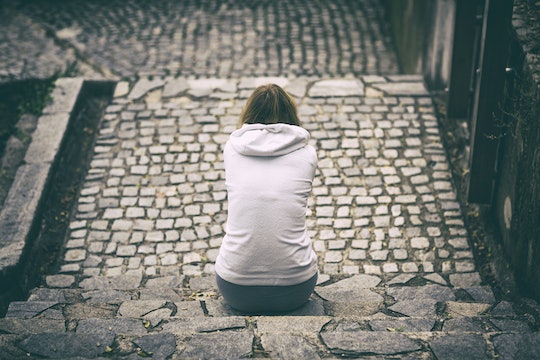 Despite the work many women and health professionals are doing to de-stigmatize postpartum depression (PPD), there continue to be assumptions made by the friends and family members regarding PPD and the women who suffer from it. These assumptions hurt moms in a way we can't possibly begin to understand; marginalizing their feelings and making them question themselves. That's why there are things we need to stop saying about postpartum depression if we want to move forward in the battle and make sure that no new mom is left behind due to lack of awareness over the many symptoms PPD can present.

Even though I knew I had a higher possibility of developing postpartum depression (after being diagnosed with prenatal depression and anxiety) I was in denial that I was suffering from it, especially during the early months. I wasn't sad, I wasn't unable to accomplish things; on the contrary, I was incredibly productive, and so, so very angry. To me, that signaled anxiety, not depression. I was wrong, however. Thank goodness I was seeing a therapist already, whom I was able to talk to about my symptoms. Once she clarified what was really going on, I was able to work through the concept of medication and decide on my own (without any pressure from my therapist because she didn't think my symptoms were severe enough to make them a necessity) whether to start taking it, or not.

In the end, I made my decision on treatment protocol, which included therapy, support group, and medication. My treatment is not everyone's treatment, but what's important to note is that I was given a full range of choices, during which I had a strong support network. All moms need these two things (among many others) in order to negotiate the minefield of postpartum depression safely. Part of providing that support is paying close attention to these 10 things we need to stop saying about postpartum depression, immediately: