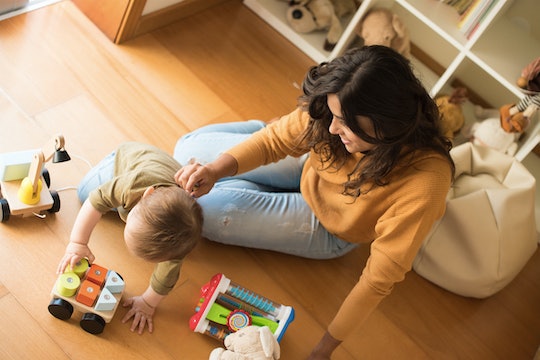 I'll be super honest and admit that I never intended to become a Montessori parent. I always thought Montessori was for kids with free-range parents who ate organic. That was, of course, until I ended up sending my son to a Montessori school, sort of on accident. I learned that Montessori was not what I thought it was, and I can now tell you with certainty that there are things only a Montessori parent really knows. In other words, this "accident" paid off big time.

More Like This
These 23 Teacher Appreciation Week Instagram Captions Will Show Your Appreciation
What To Do & Say When Your Child Says They Hate School
Here's What Your Kid Is Really Saying When They Tell You They Hate You
If A Tick's Head Gets Stuck When You're Pulling It Out, Here's What To Do

So what is Montessori, anyway? According to the American Montessori Society, Montessori is an educational philosophy that is child-led and child- focused. The basic idea is that kids want to learn, and learn best when you allow them to call some of the shots in an environment designed to give them the tools and the space to do so. Children are given independence, within limits, and are respected as human beings. With this environment, the theory is that children not only learn skills and knowledge, they learn how to learn, think critically, and problem-solve.

So, does it work? While most Montessori parents will be the first people to tell you that it absolutely isn't a good fit for every family, in my experience, it's pretty freaking awesome. There are more messes, and my Montessori kid has definitely started testing boundaries and demanding choices, but he's also gained confidence and independence, which is so totally amazing. So if you're a Montessori parent, you already know. But if you aren't, well, join the club already.