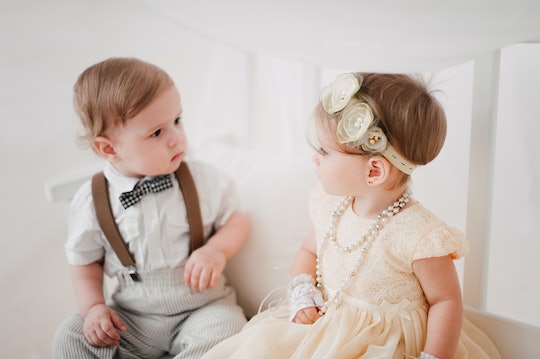 From the minute you make your "it's a boy!" announcement, be ready for the onslaught of blue-colored everything. From balloons to receiving blankets, you'll be drowning in a sea of blue. Once your baby is born, you'll receive countless baby clothes that all reaffirm the same thing: the baby wearing them is undeniably a boy. So it's somewhat understandable if you feel like it's your obligation to continue this trend of "masculine" dressing. The thing is, though, there are so many things you don't have to do when you dress your son. And, you guessed it, dressing your kid in blue is one of them.

When it came to dressing my first son, I thought I had to acquire as many navy-colored or grey-colored clothing items as possible. Ditto for little polo shirts, anything with suspenders or bow ties, and shoes that looked "just like dad's" that he would kick off after wearing them for 2.3 seconds. Of course, there was nothing wrong with dressing him in these clothes, but I recognize that I was pretty rigid in sticking to the gender stereotypes when creating his wardrobe of what was without-a-doubt "boy" clothes.

With my second son, however, I loosened up, mainly because I was exhausted but also because I just didn't care as much. I had more fun dressing my kid outside of a tightly proscribed gender code and in loudly patterned pants, cream-colored sweaters, and little French boy outfits. And as my first son got older, I've gotten more fast and loose with his wardrobe, too. He wears pink without protest, would like to dress up as a female anime character for Halloween, and wears his hair long and messy. I'm glad that together we've come to a place where neither of my sons bat an eye at a boy in a nightgown, or think anything of a girl wearing boy's underwear with a boy haircut.

So with that in mind, here are a few things I've learned as the result of dressing my sons. Trust me when I say you can survive that sea of blue. In fact, you can ignore it entirely.