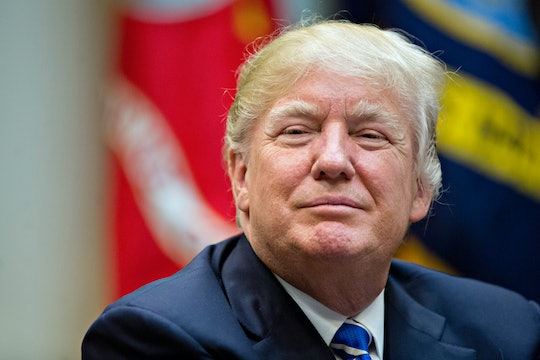 8 Times My Toddler Made More Sense Than Trump

It's no secret that President Donald Trump has made some unusual moves just a few months into his presidency. Controversial decisions may well be the hallmark of what is being described as the "Trump Era," combined with a lot of Twitter tirades, all of which has many people comparing him to a toddler. However, that comparison is unfair. Toddlers are logical at least some of the time. In fact, there have been plenty of times my toddler made more sense than President Trump.

Raising a toddler is hard work. You never know what they are going to say next, especially when you're out in public. They don't really have much of a filter and sometimes their behavior can be nothing short of embarrassing, even if it's understandable for a 2 or 3 year old. They are still only learning to regulate their emotions and grapple with their place in the world, so when they encounter a setback, a frustration, or they simply don't get what they want and when they want it, they're quick to throw a tantrum or blame someone else. Starting to sound a tad familiar, right?

Whether you voted for him or against him, agree with him or definitely don't, there's no denying that Trump has created many teachable moments for our kids. As parents, we can use his reactions to numerous events as a starting point in which to discuss appropriate behavior with our children. His actions allow us to bridge big issues like consent, discrimination, access to education and healthcare, and how to appropriately deal with our emotions. He's also showing us parents that, at the end of the day, maybe a toddler tantrum isn't all that bad.