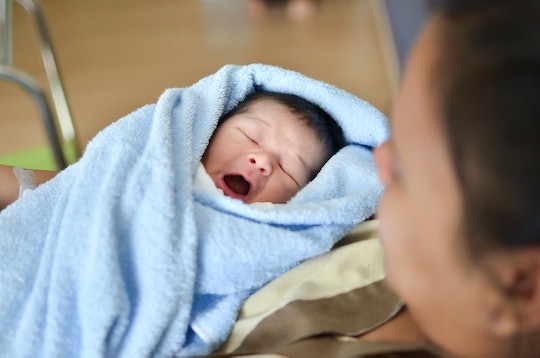 When I became pregnant with my second child, after delivering my son via emergency C-section, I knew I was going to do everything in my power to have a vaginal delivery. Cut to 38 weeks later and I was holding my massive nine pound two ounce baby against my chest after successfully squeezing her out of my body via 45 minutes of pushing. And yet, despite their very different entrances into the world, I felt a lot of the same feelings during both births. I asked other VBAC moms to share the similarities between C-section and vaginal deliveries, because I feel like we hear a lot about the differences, but not so much about what these two modes of baby-producing have in common.

I'll level with you: most VBAC moms I talked to could not think of a single way in which the two experiences were alike. I think that's kind of fair. For many, a VBAC is a healing, empowered choice after a negative or even traumatic C-section experience. Just like any other pregnancy or birth, there are no two situations that are exactly alike, and even when people experience similar situations, they can (and likely will) experience them in extremely different ways.

Personally, I did not have a traumatic C-section. I didn't even have a negative experience. My desire to go for a VBAC wasn't born of a desire to avoid a C-section so much as it was to experience a vaginal delivery. What I found to be similar about a C-section and a VBAC is that they were both great in their own ways. I feel as if both of my babies came into the world exactly as they were "meant" to (and, in a way, that eerily reflects their personalities, with my son stubbornly refusing to budge and my daughter helpfully easing her way through whatever the world throws at her). And, while in the minority, other moms found a few similarities between these two types of deliveries, too.