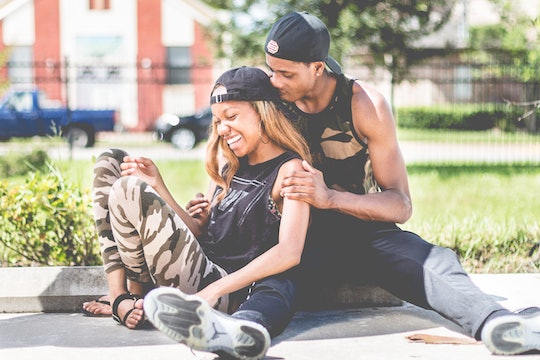 One of the big things that attracted me to my partner, from just about the first time I met him, was his unabashed, very vocal feminism. From issues ranging from abortion to airbrushing, he was engaged, opinionated, and just as angry as I was. Feminism has strengthened my relationship, sure, but moreover its laid the groundwork for how it operates and what we want it, our lives, and our world to be.

As a point of clarification, I can only really speak to my relationship here, and I suppose it's important to point out that I'm a cisgender woman in a relationship with a cisgender man. When you're talking about gender equality, I think it's probably important and fair to discuss the genders in question and, as a result, get a better idea of what a couple is likely working with, from the perspective of societal expectations.

Having said that, when it comes to those societal expectations, my and my husband's official stance is (basically) as follows: "LOL! Nah! Thanks, tho, dude!" In fact, we're both emphatic about it. In the light of what promises to be a terrifying four years (politically and likely socially) our mutual feminism has brought us even closer by giving us something to rally behind now more than ever: husband and wife against the Patriarchy. (I feel like this would be a great comic book. If anyone is interested, go ahead and give me a ring.)

However, even when we're not hellbent on bringing down "The Man," feminism has provided a solid (and fabulous) foundation for our relationship in the following ways: