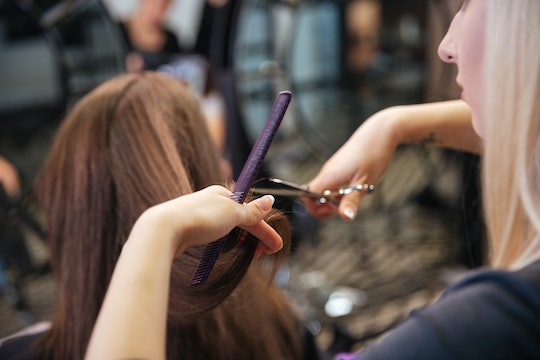 8 Ways To Defend Your Postpartum Haircut When People Judge

The first postpartum haircut can be a rite of passage for many women. It’s the first time a new mom might give herself permission to tend to herself, and it can be an opportunity for her to claim the new "mom version" of herself. Sometimes the cut takes a more drastic turn than originally expected, or doesn't go as planned. Even if it is exactly what you wanted, people have a hard time accepting change. In the case that it is necessary, you'll need some ways to defend your drastic postpartum haircut, so I've got you covered with a few go-to responses.

By the time I got my first postpartum haircut, my hair was the longest it had ever been. Like a lot of new moms, I had a lot of hair growth throughout my pregnancy and I was totally loving life with my lustrous and long hair. I also had hoped that my long hair would balance out my enormous belly, and lend my rotund frame some "length" (OK, whatever, it made sense to me at the time).

After my baby was born, however, I was overwhelmed with this impulse to make some kind of drastic aesthetic change. I wanted to pierce something and I wanted another tattoo (but couldn't do either because I was breastfeeding). Next best thing? A brand new haircut. My dream was to have curl-free, beach-ready, wavy, platinum-blonde hair. I had no clue how this would be attained since I was born a curly brunette, but in a world where almost anything could be bought, from bigger lips to a rounder butt, I figured we could give it a go. When, instead, I became the not-so-proud owner of a dyed-red, lopsided curly mullet, I had to come to terms with the "new me" being different from what I had expected. And once I'd gotten over it, more or less, I had to face the next challenge: explaining my new haircut to everyone else.