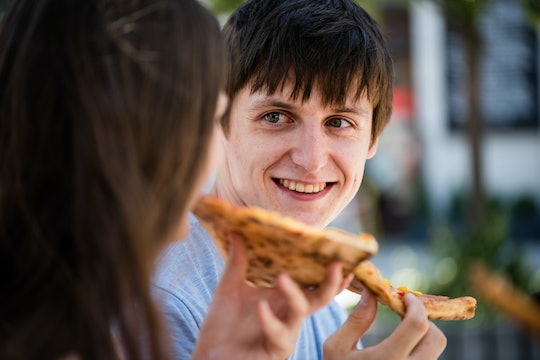 9 Dads Share The Moment They "Knew" Their Partner Was Pregnant

My husband never saw my first pregnancy coming. That was fair, considering I didn't either. Like, we knew where babies came from and we had discussed children, but that positive pregnancy test was a (mostly) pleasant surprise. Reminiscing about his gobsmacked shock made me wonder if there were other dads out there who had any inkling about their partner's pregnancy before it was confirmed or announced. So I reached out to some of my dudes and asked them to share the moment they "knew" their partner was pregnant.

As it turns out, the vast majority of them, like my own darling husband, were absolutely clueless. Many were suspicious of my question or didn't even know what I was getting at.

"Do you mean what did I do when I found out she was pregnant?" my friend Jonathan asked.

"No. Was there a time you thought 'Hmmm, maybe she's pregnant?' whether or not you were right."

He wasn't alone. Initially, a lot of these dudes' responses were the written equivalent of staring at me vapidly for a couple minutes before, eventually, shrugging. But there were some among them, some magical uterus whisperers, a few ovarian Jedi, who somehow, mystically, felt their baby-senses tingling and guessed that their partner was pregnant before she made any official announcements.

More Like This
What NICU Means & What To Expect From A NICU Stay
Introducing My Boyfriend To My Kid
Chrissy Teigen & John Legend Are Back On The Red Carpet
From Sexy To Spooky, These Pregnant Halloween Costumes Will Make An Impression