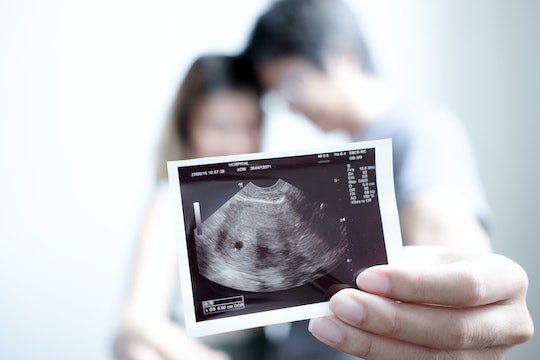 Realizing you’re going to have a baby is an incredible, unforgettable, complex moment. Every time I’ve been pregnant I’ve experienced joy, terror, and everything in between. Another big revelatory moment? Finding out the sex of your baby. Even though gender is a social construct, and the gender assigned at birth is not always an absolute, there's something about finding out the sex of your growing fetus that makes parenthood feel all the more real. So I asked dads to share their reactions to finding out they were having sons and, well, reality hit them like a bag ol' bag of feelings.

I asked my husband how he felt when he found out we’d be having our son, knowing his answer could be a tad complicated. We had previously lost a baby girl, and I know, for me, the emotions around finding out the gender of our second baby were complicated. Part of me felt a tinge of disappointment and sadness (which I later came to realize was unnecessary). I was afraid I would never experience all the "raising a girl" things I had planned on enjoying with a daughter, like doing something special for her first period, or helping her through her own pregnancy once she became an adult. My husband didn’t think much of it one way or the other, though.

“I think I was more preoccupied with him being alive and staying that way, to be perfectly honest. Is that bad? I don’t think it was a normal situation,” my partner told me. I can certainly understand his response, and definitely don't think it's "bad" at all. Every parent, and every pregnancy, is different, though. So with that in mind, here's how a few other dads felt after hearing they were having sons: