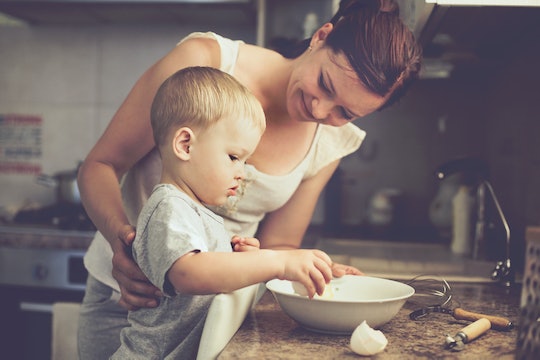 A few months ago, I was hanging out with my son near a bouncy house, where all the kids had taken their shoes off. My little one, around 16 months at the time, found another kid’s sparkly shoe and was immediately taken with it. I was watching him, smiling and making sure he didn’t take off with it. Another parent spotted us, bent down toward him and said, “Oh, no! You don’t want that girly shoe!” It's already happening, I thought. People are already trying to stuff my baby boy into the "Man Box." It was one of many times in his still-new life that having a son has reminded me how much we all need feminism.

I’m a feminist mom because I want better for my son. If he's not actually a cisgender guy, I don't want him to grow up thinking that's the only fully legitimate way to be, and that he’s lacking somehow for not being that way. I he is, I don't want him to join the legions of hurt, angry, broken men who either struggle to learn to be full people, or fail to unlearn all the toxic stuff they've been raised with and, as a result, end up hurting other people and themselves. Feminism is as urgent for our sons as it is for the rest of our children, because toxic masculinity distorts and dehumanizes them, too, and fuels the overwhelming majority of the danger everyone of every gender faces.

Honestly, if he decides the next time we go shoe shopping that he wants sparkly shoes, I’m happy to buy them for him. The shoe my son found was awesome, and caught his eye because it was interesting. It has no gender. Fortunately, he ignored the person talking at him and kept playing until the shoe’s owner returned. I hope that as he gets bigger, he continues to tune out people like this, and that when he can’t, that what we say to him will resonate louder than the people who do things like the following.