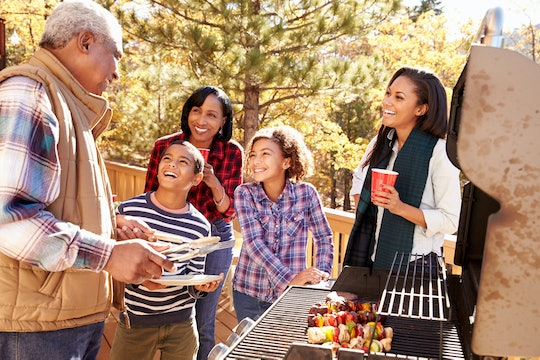 Progressive moms are on a mission: to spare our kids as much sexist, patriarchal nonsense as we can, so we can raise them to be whole, happy people who treat all people with the dignity and respect they deserve. We want our kids to be safe, which means confronting and dismantling rape culture and all other forms of systemic and gendered violence, and we want our kids to be free, which means questioning anything or anyone who tells them they have to be a certain way just because of the assumptions people make about them based on how they were born. Often, "anyone" is a person in our own family, so there are definitely some things in-laws say to kids that no progressive parent will tolerate.

I'm really fortunate to have a positive relationship with my in-laws. I know that's not always the case for many folks, and I and other parents I know have definitely had to field problematic questions, comments, and other less-than-desirable behavior from our extended families and families of origin (especially once we have kids). So, while in-laws often get the most heat when parents start chatting, plenty of following could (and should) apply to the rest of our families, too.

Honestly, there's just some stuff that would never, ever come out of a feminist mom's mouth unless it was also accompanied by the world's biggest and most obviously sarcastic eye-roll, or a prelude to what would surely be a withering rant. As a result, there are things a progressive parent wouldn't tolerate someone else saying to their kid, family or not. Our choice not to say certain things isn't enough, as we're all well aware that our children will spend as much (if not more) time with many other people throughout the course of their life. When we can, it helps to make sure that we surround our children with positive, progressive role models, which is why a progressive parent wouldn't tolerate the following: