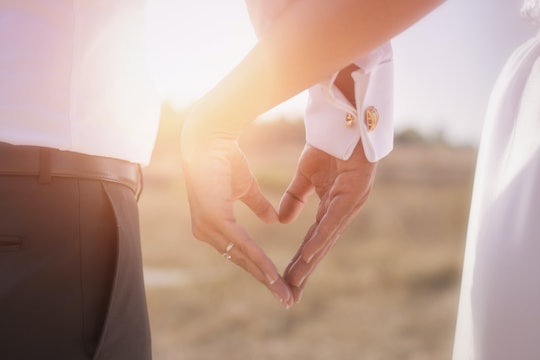 9 Media Depictions Of Marriage That Every Married Woman Hates

I've been married for five years now, and in a relationship with my husband for more than ten. While I'd love to tell you that our marriage has been all sunshine and beach vacations and expensive bottles of wine, it hasn't. That doesn't mean that I love my husband any less by admitting that our marriage isn't "perfect," it just means that, despite the media's ridiculous depictions of marriage, it isn't an extended, romantic, booze-filled honeymoon. It's hard. In fact, sometimes it's really hard.

My husband and I have definitely had our ups and downs, but throughout them I feel like we've learned a lot about each other and ourselves. Our relationship changed after we had a baby, which I was sort of expecting but I admittedly didn't necessarily understand. Most soon-to-be parents assume there will be alterations to their lives after their baby is born, but I didn't realize how deeply some of those changes would affect my marriage and the life I share with my husband. Marriage is so much harder after having kids. It just is. That doesn't mean that it's not still great, or that it's not even better now, but having kids has inevitably made our marriage more difficult.

Something that doesn't help married couples overcome their own hurdles is the way the media depicts marriage. I get that television shows and movies and magazines are meant to entertain us, but I feel like a lot of what we're exposed to in mainstream media is missing the marital mark and, instead, creating unrealistic expectations of marriage. Instead of depicting what a real married couple looks like by highlighting their real struggles, their real highs, their real lows, and their real in betweens (which are just as important as everything else), the media is filling our heads with unrealistic delusions of "marital perfection." I can tell you from experience; "marital perfection" as television shows, movies and magazines show it, doesn't exist.

I'm not buying any of the following nine lies we've been told about married couples, and I hope you aren't either. Honestly, if your marriage is going to work, especially after having a baby, the best thing you can be is realistic.

More Like This
43 Instagram Captions For National Brother’s Day That Say It All
Say What's In Your Heart With These Stepmother's Day Quotes
Stepmom Quotes & Sayings For Every Occasion
This Mom Gave Birth On Graduation Day, So The University Brought Her Degree To Her