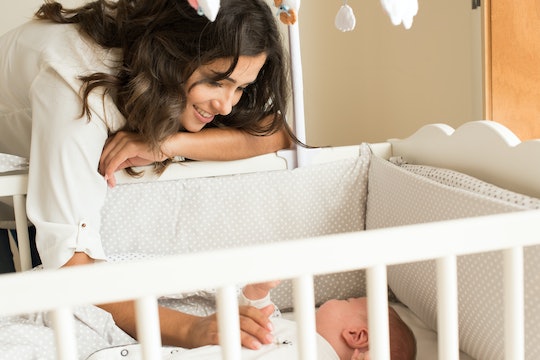 How To Help A Mom Whose Baby Won't Sleep

Understatement of the century: being a new mom is freakin' hard. One of the little gifts of new motherhood is this magical thing called a "nap," and the newer the baby supposedly the longer and more frequent the nap. Ideally, a new mother is supposed to sleep when the baby sleeps to make up for all those night time wake ups. For a mom whose baby refuses to sleep, however, she is in for a rough time. You might wonder what the best things you could do for a mom whose baby won't sleep might be, besides paying for a night nurse or offering to stay up with the baby (wouldn't that be nice). Turns out, there are quite a few small things you can do that would make a huge impact on a mom whose baby refuses to sleep.

My first baby was definitely of the no-sleeping variety. He never napped for more than 20 minutes at a time (on a good day) and it took Herculean efforts to achieve even that. I knew that almost everyone else's baby around my son's age was napping during the day and sleeping during the night a lot more than mine, and I didn't understand what was wrong with me or with my son. I bought every sleep book and read every article I could find. I tried all the methods suggested to me by my mom friends that "worked" for their babies. I decided either I was doing it wrong or my baby was broken. During that period, however, I wasn't leaving the house and I wasn't encouraging visitors because I was set on creating the "perfect sleep environment" and setting up a "nap routine" that could not be messed with.

After a while, I realized there was no point in being alone in my apartment, striving for this elusive thing called sleep that was just not going to happen for us. When I started allowing and inviting friends to come over and keep me company instead of struggling alone, and soon after that, began to leave the house to go on adventures with my sleep-despising baby, life got a lot better. However, I could not have done it without the friends who helped see me through it all by doing the following things with me:

More Like This
Here's When Your Baby Might Start Sleeping Through The Night For Real
Should You Be Giving Your Toddler Melatonin To Help Them Sleep?
Here’s What You Need To Know About That Viral 1960s Baby Formula “Recipe”
Ashley Graham On The “Fun, Organized Chaos” Of Raising Twins