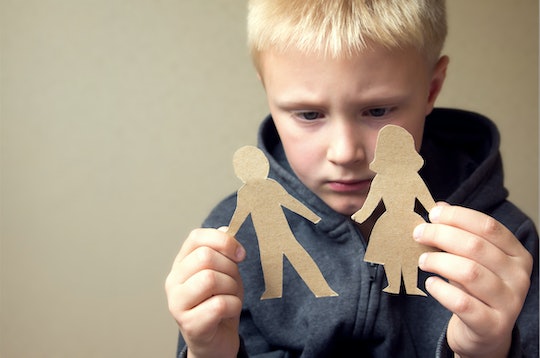 9 Parenting Choices You Only Make If Your Marriage Is Toxic

Calling my first marriage "toxic" is a huge understatement. My ex and I didn’t see eye-to-eye on, well, anything. The space between us was big, and the silence between us even bigger. For the most part, I learned to cope being married to a narcissist. It wasn’t easy, but it was doable. Then we had kids, and our toxic marriage started to impact them, too. You see, there are parenting choices you only make if your marriage is toxic. Unfortunately for us, this is something that I didn’t realize, until our marriage was well past it's expiration date.

Our relationship wasn't always toxic, though. The poison seeped in, slowly coloring our interactions. The first to go was communication. The silence between us was deafening. Some days we would go without talking at all. I learned that when you don’t communicate with your partner, it’s impossible to co-parent efficiently and affectively. We didn’t talk about the hard stuff, and we never really got on the same page about so many little things, either, which directly impacted our parenting. I found myself either making decisions completely on my own, which he would inevitably criticize, or letting him call the shots and parenting in ways that were not in line with my style.

Then he started spending more and more time away. He was rarely at home, and when he was he didn’t do a damn thing unless I left the house and he was forced to. I was pretty much a single parent long before I left, even though we were still living in the same house. We fought a lot, and even even though we never fought in front of our kids, they knew something was up. And I'm convinced my kids knew not just because kids are perceptive, but because living in a toxic marriage changed the way I parented them.