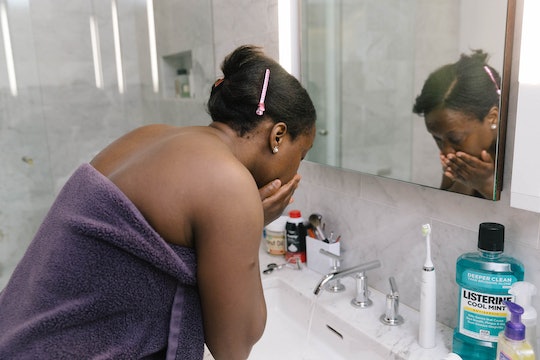 Morning sickness is one of those things you have to experience to really understand. Movies, television shows, and overplayed stereotypes make it seem like a bad hangover (which would be semi-accurate if hangovers lasted months). And since most people can't understand, you're left feeling isolated and alone. Fortunately, however, there are empathetic people in the world who will offer you support, sympathy, and food you can actually keep down. Those people will totally change your life when you have morning sickness, and I think it's time we show them a little love.

Before I found out I was pregnant I kind of assumed I would end up suffering from morning sickness. But, honestly, I thought "morning sickness" meant throwing up once or twice in the morning, then moving on with my day. Yeah, I was wrong. I suffered from intense nausea and vomiting my entire first trimester, morning, noon, and night. And because I'm just lucky, I guess, my second pregnancy was even worse. Instead of experiencing the regular, run-of-the-mill morning sickness, I had full-blown hyperemesis gravidarum (HG) — severe nausea and vomiting — that required medical intervention. It was a nightmare. My third pregnancy wasn't any better, so after my son was born I decided I was done with the whole "getting pregnant" thing and had my tubes tied.

During each bout of morning sickness I realized that most people, especially people who are physically unable to get pregnant, just don't get it. I think most non-pregnant people are under the misconception that morning sickness is not a big deal, or even a rite of passage that all pregnant women just have to endure. But I did encountered a few people who seemed to "get it." And, to my surprise, some of those people didn't have any personal experience with morning sickness, but still saved my sick and miserable ass. So even when all feels lost and you're spending an inordinate amount of time with your head in a toilet, look around. There are people who can help, who will be supportive, and who will straight up change your pregnant life.