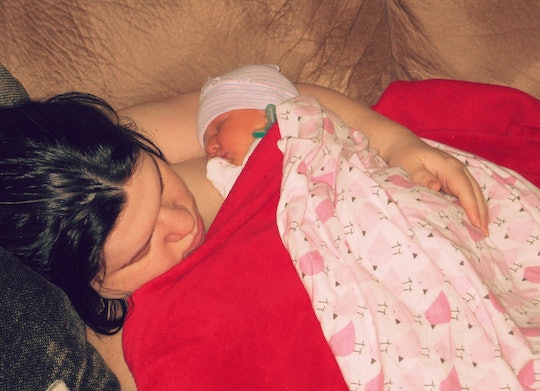 I Blamed Myself For Not Being Able To Breastfeed

Moms tend to blame themselves for everything. I think once the baby passes through the birth canal, women are automatically given an extra guilt gene. This guilt gene affects even the most level-headed women, too, and my guilt gene is undeniably strong. Since I blame myself for pretty much everything that happens to and with my children, it was no surprise when I blamed myself for not being able to breastfeed my firstborn. I must admit, I naively believed breastfeeding wouldn't be a big deal. In fact, I thought breastfeeding my baby was going to be a given. I mean, obviously I'm going to breastfeed, so it'll be a breeze, right?

When I had my daughter in 2009, I didn't have any close friends who were moms. I was the first one, for a long time, out of all of my friends to have a kid. I did not belong to any support groups. There was not a plethora of online articles about the heartaches of childbirth, or the intricacies of postpartum life, or the difficulties of breastfeeding. I had a few parenting books that were hardly helpful, my mother and her earned knowledge, and my common sense. That used to be enough. The world believed that was enough.

But that wasn't enough. If I had the same amount of information back then that is now available to all new moms, I could have potentially not suffered as much as I did. If I had just known I wasn't the only one struggling to breastfeed maybe I would have been less hard on myself. Maybe I would have been less critical and more supportive of my own choices. Maybe I wouldn't think I was the worst mom who had ever walked this earth.