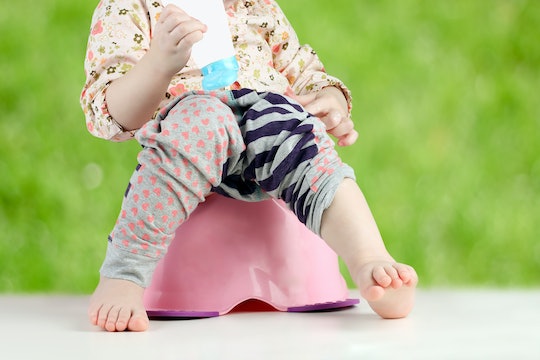 9 Stupid Things I Said About Potty Training, Before I Had A Kid

I've said a lot of stupid things in my day, about a plethora and wide variety of things. I'm not proud of it, but I'm human and I make mistakes and what I was once so sure of, sometimes, turns out to be incredibly wrong. I'm not above eating crow and there comes a point, in everyone's life, when you just have to suck it up and admit fault. That time is now, kind reader, because the stupid things I said about potty training before I had a kid need to be talked about. Unfortunately.

I can't say I'm that surprised that, when it comes to potty training, I was wrong about the majority of the long, seemingly never-ending process. Parenthood is unpredictable at best, and so far my time as a mother hasn't been even a fraction of what I thought it would be like. Sometimes, it's better than I could have imagined. Sometimes, it's ten times more difficult that I could have prepared for. Until you're in the thick of it, you just don't know what you're getting yourself into, and potty training is no different. I remember starting this process so cocky and confident and just completely sure of myself. It was going to take me a week; it was going to be relatively painless; it wasn't going to be messy and I was going to be able to ditch the diapers in no time at all. Ha ha. Ha. Ha. Oh, I'm so stupid.

Ignorance might be bliss, but it sure does make you dumb. I learned a lot when I was potty training my son, and the lessons are on-going as we've recently hit a few snags and have found ourselves in need of diapers. Again. So, with that in mind and in the name of painful honesty, here are just a few of the stupid things I said about potty training before I had a kid. Ugh. This one hurts.