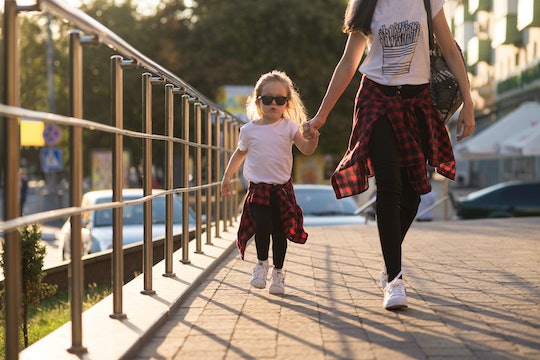 9 Things I'd Rather Be Than A "Cool" Mom

Sometimes I think there's a chance I'm a "cool" mom even though that's not even on my list of goals as a mother. Then I look at my daughter's stroller and realize it's literally covered in dried banana and a layer of crushed animal crackers and there's a selection of random, brightly colored toys in the basket below. Meanwhile, my daughter is chewing on a stick she picked up at the playground. Collectively, I'm pretty sure those things ban me from being a "cool" mom. The good news, though, is that there are at least nine things I'd rather be than a "cool" mom.

I've been trying to think about what a "cool" mom actually is, and what I've come up with is actually a list of things I achieve occasionally but really don't have the time, energy, or interest to fully commit to on even a semi-regular basis. I can't be dressed in trendy clothes all the time, and neither will my daughter. Every time I try to put on makeup with my daughter around, she insists on playing with the brushes and 30 minutes later we're still playing in the bathroom. I won't have all the coolest baby gear or toys, and my kid is not going to be enrolled in all of the most perfectly educational classes. Whether it's down to finances, interest, or energy, being the "cool" mom just isn't something I'm willing or able to commit to.

Luckily, there's a whole list of things I'd rather commit to than being the "cool" mom. Honestly, I think my kids will be just fine — if not better off — because of it!