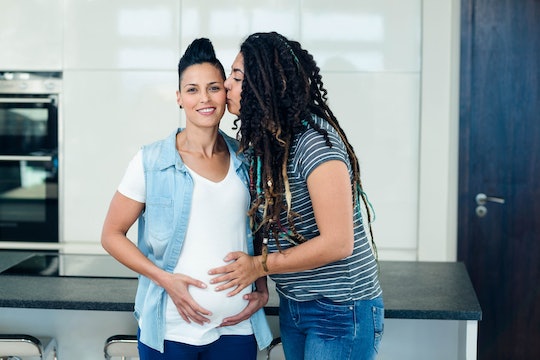 9 Things Pregnancy Can Do To Your Marriage

You'd think marriage and pregnancy would go together like peanut butter and jelly but, for me, there were times it felt more like mayo and chocolate. Not so much gross, but it just didn't make sense or (sometimes) felt way harder than it probably should've. Pregnancy was a trying time for me every time I went through it, and my relationship suffered as a result. I learned some things no one will tell you about marriage after getting pregnant only because I lived it and learned from it (I hope).

My first pregnancy, way back in my early 20s, was a shock, surprising both my partner and I. I was on birth control so although we were careful, things still happen. That's life, I suppose, but once we knew and adjusted to the change it would bring, we were elated. At that time, we weren't married and my partner had no plans on asking me anytime soon. I don't blame him because I'd been married and divorced right out of high school and the day I discovered this first pregnancy, he and I had only been together for a little over a year. We were young and unsure of just about everything. Would we even last? Only time would tell.

That pregnancy was difficult for a lot of reasons, mainly that my partner and I were having a baby before we were fully committed to staying together. I had a mound of health problems and was miserable the whole nine months. After the delivery, I experienced such awful postpartum depression (PPD) that I became suicidal before seeking treatment. I'm surprised we made it through all of that, but we did. The very next year, we got married. My daughter was my maid of honor, carried down the aisle by a long lost friend and, although it would be about a year before we'd even think about trying for a second baby, I could see all the ways our relationship changed just by being unified by marriage.

Once we actively attempted another pregnancy, I suffered two miscarriages at two separate times. These trauma-filled moments still linger between my partner and I, even all these years later. I thought I'd never carry another baby to term. It changed the way I thought about everything, especially my relationship with my husband. Then, one unexpected day out of the blue, I took a pregnancy test for absolutely no reason other than I had a metallic taste in my mouth that wouldn't go away. I was pregnant again five years after my first pregnancy almost to the day. This time, however, I was in a committed relationship with another child to care for. I couldn't help but wonder all the ways the pregnancy would affect those things.

Now that I've gone through it and come out the other side, marriage still in tact, I've learned a lot and grown up a lot. Here are some of those things that no one will tell you about your marriage and pregnancy and how the two may (or may not) mesh.