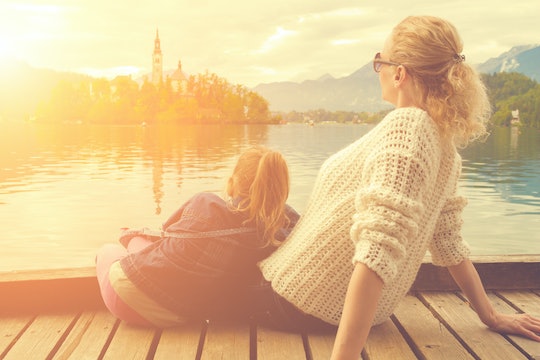 Growing up, I was often reminded that I could "lose some weight." From overt suggestions at the pediatrician’s office to the endless bombardment of images that highlighted the “ideal” female form in movies and magazines, the consensus was that I could drop a few pounds. I knew what it was like to lose confidence in your body, and how that loss would translate to losing confidence in yourself as a human being, so I was determined that I would find ways to raise a more body confident daughter once I became a mother. My mom had her own struggles with body image, having been forced to diet as a teen when she gained the “freshman 15," and I think that is one of the many reasons why her struggles ended up becoming my struggles. I don't want my child to end up feeling the way I constantly felt as a kid, less than worthy, for weighing more than average, especially because of something I said or did.

Currently, my daughter seems to be very comfortable with her body. Once, when she was around six, she grew frustrated with her hula hooping ability. “I need to be fatter, Mommy. So this hoop can fit me better.” I laughed, because it never dawned on me that someone would want to be thicker. I had spent decades trying to be thinner and trying to shrink myself and trying to be anything other than what someone could conceive as "big," so my daughter's adorable words were revolutionary to me. She was essentially saying that dissatisfaction with our bodies is not limited to weight, but can include anything what we want them to do for us, and what our bodies can do is far more important than how they look.

Since then, I’ve been more conscientious about what could possibly influence my daughter’s perception of her body. I want her to grow up trusting her body as an ally. I don’t want her to feel as I did; that her body betrays her because it doesn’t fit into a certain size or curve in certain places or doesn't fit into some predetermined, horribly unrealistic and often-times unhealthy social standard.So, in addition to avoiding a focus on her appearance, here are some things I’m doing to, hopefully, raise a more body confident daughter: