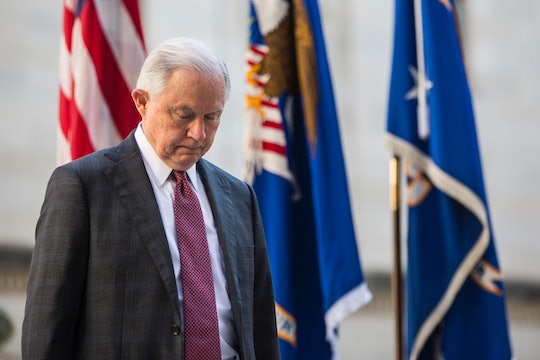 If there's one saving grace of the Trump administration's attack on undocumented immigrants, it's the judicial branch. Case in point: On Friday, a Chicago judge blocked Donald Trump's attack on sanctuary cities and it's one, albeit tiny, victory when it comes to protecting vulnerable communities. In the wake of increased Immigration and Custom Enforcement raids, the rollback of the Deferred Action for Childhood Arrivals program, and the administration's overall stance on immigration, mayors of major cities have pledged to protect their immigrant citizens and cooperate as little as possible with the federal government when it comes to enforcing immigration.

In response to this lack of cooperation, Attorney General Jeff Sessions, who heads up the Justice Department, said in March that he would block any federal grants to sanctuary cities as a form of punishment. In April, Trump made an executive order giving the Justice Department the power to do so.

Chicago was expecting around $2.2 million from the Edward Byrne Memorial Justice Assistance Grant Program, which goes directly to law enforcement. (Part of it was to be spent in part on cracking down on gun violence, for example.) In July, Sessions announced that cities expecting money thorugh that particular grant would have to give ICE 48 hours notice before undocumented immigrants were released from jail, give ICE access to jails, and provide the federal government with immigrant's personal data.

Chicago sued after the announcement saying that it would cause harm to the city; On Friday, U.S. District Judge Harry D. Leinenweber in Illinois wrote in a 41-page opinion in favor of Chicago and said that Sessions went too far.

Although Leinenweber was judging the Chicago suit against the Justice Department, he added in his opinion that there was no reason his ruling shouldn't be applied nationwide. He wrote:

There is no reason to think that the legal issues present in this case are restricted to Chicago or that the statutory authority given to the Attorney General would differ in another jurisdiction.

He found that denying the city grants that goes toward making the city safe would cause Chicago "irreparable harm" and that it would cause the city to lose the trust if immigrant communities, which means that they might be less likely to report crime, for fear of deportation. That's already happening in some cities, where women have reported not reporting sexual assault or other crime for fear of being separated from their families.

"Once such trust is lost, it cannot be repaired through an award of money damages, making it the type of harm that is especially hard to rectify," Leinenweber wrote in his opinion.

The Justice Department does not agree and maintains that sanctuary cities make the country less safe. Devin O'Malley, a DOJ spokesperson said in a statement:

By protecting criminals from immigration enforcement, cities and states with so-called sanctuary policies make their communities less safe and undermine the rule of law. The Department of Justice will continue to fully enforce existing law and to defend lawful and reasonable grant conditions that seek to protect communities and law enforcement.

Chicago isn't the only city to fight the DOJ's crackdown on sanctuary cities. In April, a San Francisco judge also blocked Trump's executive order in April, too, although it exempted the Edward Byrne Memorial Justice Assistance Grant since the state already had requirements that law enforcement provide proof of cooperation to receive it. Friday's injunction from Leinenweber only temporarily blocks the Justice Department from withholding funds as it moves up through other courts.

Sessions said in April that sanctuary cities make the country dangerous, although there is no evidence that undocumented immigrants commit more crimes than anyone else. In fact, studies show they commit less crimes than U.S. born citizens. Still, Sessions defended his stance against sanctuary cities, saying:

So-called ‘sanctuary’ policies make all of us less safe because they intentionally undermine our laws and protect illegal aliens who have committed crimes. These policies also encourage illegal immigration and even human trafficking by perpetuating the lie that in certain cities, illegal aliens can live outside the law.

So far, that hasn't been the case. Hopefully, the DOJ will see that taking away federal grants from law enforcement and scaring people is not the way to make any city safe. Until then, it will be up to judges all over the nation to stand up for undocumented citizens' rights.