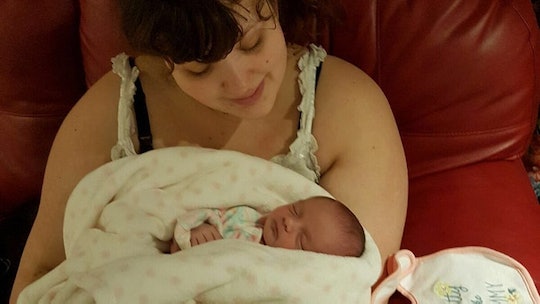 Actually, I Had *No* Birth Plan, & It Wasn't The Best Call

I've never been much of a planner. Although I'd love to chock this up to a free spirit and desire to live a life of spontaneity, I'm mostly just indecisive. I struggle to plan because I struggle to make decisions, whether we're talking choice of breakfast cereal, vacation destination, or potential employer. It's no wonder, then, that I didn't have a birth plan before my daughter's arrival in December 2016.

In the months before Luna was born, every check-up with a doctor or midwife ended in one question: have you given any more thought to your birth plan? Did I want a home birth or a hospital birth? Did I want to learn all about the benefits to laboring in doggy style? Would I be needing a pool? Had I been to the Lamaze class just down the street? How about another hospital bag checklist?

In truth, I knew very little about what I wanted, let alone how I wanted to do it. I figured birth was going to be messy, painful, and at least a little bit traumatic (if for no other reason than the potential rupture of my vagina) no matter what I chose, so why stress about formulating the perfect plan?

I didn't need the potential disappointment of formulating a birth plan, only for every aspect of the plan to implode on the day of. I didn't want to risk feeling like I'd somehow failed myself or my new kid.

All I really knew going into things was that I wanted a hospital birth over a home one, just in case something went wrong. The thought of having to travel mid-labor horrified me. In retrospect, however, there were pros and cons to my decision not to create a plan. If I'm being honest, there were mostly cons.

In the end, the major advantage to having no birth plan before my daughter's actual birth was that I wasn't stressing about plans. Some people thrive off calendars and lists, but I don't think I'm one of them. "Winging it" meant I wasn't second-guessing every decision I'd made. Instead, I was "going with the flow," if you will, and my anxious disposition was actually benefiting from it.

The immediate months before becoming a first-time parent can be a whirlwind for anyone. My husband and I were personally dealing with an international move, changes to our jobs, and house-hunting in a new country on top of it all. My mind was consumed by setting up the nursery and reading up on breastfeeding. I just didn't need any more information overload. I didn't need the potential disappointment of formulating a birth plan, only for every aspect of the plan to implode on the day of. I didn't want to risk feeling like I'd somehow failed myself or my new kid.

There were downsides, though. Not knowing what I wanted from my birthing experience meant I was leaving the door open for a lot of other people to make the decisions for me. Although pregnancy healthcare is led by midwives in the UK, where I currently live, doctors will step in at the hospital if they feel they are needed. They'll also exercise their right to bring in student doctors, anaesthesiologists, and anyone else they fancy to spectate.

My lack of a birth plan meant that I ended up being transferred to the care of a doctor after finally growing comfortable with one of the midwives. It meant that said doctor felt free to bring in an audience of 12 strangers to watch me deliver. It meant another midwife more or less guilt-tripped me for wanting an epidural. She didn't take any drugs when her kids were born, and she "never felt more powerful." It meant I felt entirely out of control throughout the moments when control was precisely the thing I wanted to hold onto.

Not having a birth plan also meant I didn't educate myself enough to know that I could've spoken up. I could've insisted that a midwife coach me through the remainder of the birth, rather than an unknown doctor. I could have asked him to kick out his posse the moment he brought it in. I could've demanded privacy. I could've asked that people keep their views about pain killers to themselves.

Despite the fact that I ended up giving birth (and releasing all manner of bodily fluids) in front of a dozen total strangers and feeling really insignificant and overlooked as a result, I cannot say that I would change a thing about my no-plan-plan. It was because of my indifference to birth plans that I landed myself in a situation that taught me what I'd want to do differently if given another opportunity. Should I have another child, I won't be afraid of using my voice. I won't be afraid of asking for what I need. I won't be afraid of prioritizing my own comfort. I guess I won't be afraid of a little planning.

More Like This
Mom Gives Birth To Record-Breaking 16-Pound Baby
When Does A Baby Recognize Their Father? A Pediatrician Explains
Paris Hilton Is Officially A First-Time Mom
40 Valentine's Day Outfits Your Girls Will Adore Showing Off This Season
What Parents Are Talking About — Delivered Straight To Your Inbox