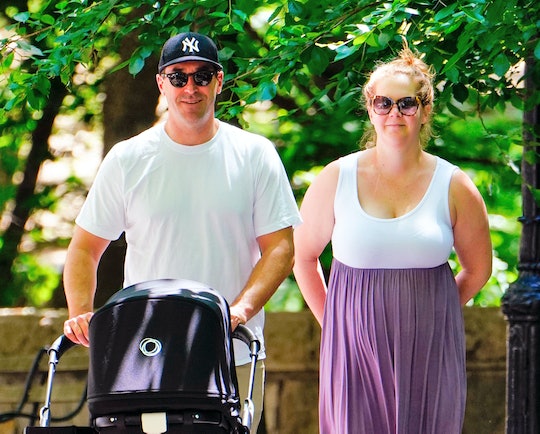 While many baby milestones like walking and talking will bring excited parents to tears, Amy Schumer admitted her baby made her cry recently for another relatable reason: his first fever.

Schumer celebrated her wedding anniversary with her husband Chris Fischer on Thursday, marking two years of marriage, and took to social media to give him a pretty lovely shout out, letting her followers know she appreciates him and everything he does for her and their 9-month-old son Gene, who was born on May 6. Especially as they experienced their little one getting sick.

"It’s my anniversary to marrying this guy. I’m really glad we got married," Schumer wrote on Instagram on Feb. 13. "Our baby was sick and got his first fever this week and I cried hard and Chris was solid as a rock. Anyone else cry the first time their baby got sick?"

Loads of moms responded to Schumer's post, admitting they too broke down a bit the first time their little one got a fever. "Yes it was absolutely traumatizing!" one mom commented. "We went to the ER because his fever was high and the did a chest X-ray. It was awful putting him in the little machine for that. I still tear up a little thinking about it." Another wrote "Sure, also cried when he got his second fever... and third..."

Others shared that becoming a parent is just an overall emotional experience. "Having children makes you criers for life," one person wrote, while another pointed out that it isn't just baby's fever that makes parents cry: "First time mine got the shots. It was unbearable."

Fortunately the I Feel Pretty actress is getting in some laughs with Gene along with the tears. In January, for instance she shared a cute picture of little Gene climbing up her torso and putting his fingers in her mouth with the caption: "Put the milk on the counter and nobody gets hurt."

It's nice to hear that Schumer's husband has taken on the role of being her "rock," particularly as the couple goes through IVF treatments in hopes of giving Gene a little sibling. Once a second baby arrives, Schumer will likely be twice as emotional and that, my friends, is motherhood.