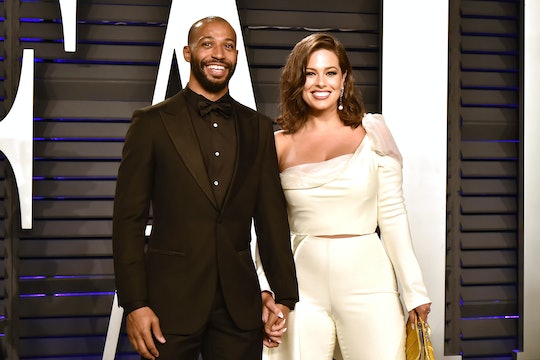 It's a subject that tends to be sensitive or taboo for many new moms, but fortunately more and more have opened up about their own experiences with postpartum sex. Like Ashley Graham, who got candid about sex after childbirth in a new interview with People. And while everyone's situation is different, it's refreshing to hear someone speak so frankly about what it was like for her.

Graham and her husband of 10 years, filmmaker Justin Ervin, welcomed their son Isaac in January. Since becoming a mom, the Sports Illustrated model has been incredibly candid on a whole host of parenting topics, and apparently sex after giving birth is no different.

The Pretty Big Deal podcast host told People that she has been asked by a lot of women if she was nervous to have sex that first time after having a baby, and her answer? "Not at all," she told the magazine, "and the reason I wasn't was because I know my vagina was made to have a baby and to push it out, and I knew it was going to go right back [to what it was]. Everything's still in there, it all feels the same, the furniture is just probably rearranged."

Graham went on to point out that the sleep schedule of her newborn helped when it came time for some loving with her husband. "When you have a newborn, they usually sleep for a couple of hours, so we'll put him in the bassinet on the other side of the room and get it going," she told People.

There is no definitive timeline recommended by medical professionals after giving birth, according to Healthline, because every woman's postnatal experience is different. Generally speaking, though, doctors consider it a good idea to wait a minimum of four to six weeks to help new moms heal, so keep that in mind when you are considering Graham's comments about sexy time.

Graham has long been pretty transparent about her sexual relationship with her husband. In 2019, for instance, she told Elle in an interview that her marriage advice includes "have sex all the time." She went on to explain that her sex life with Ervin has been one of the cornerstones of their relationship, "even if you don’t feel like it, just have sex. I have found that if we haven’t had sex, we get snippy, and then if we are having sex, we’re all over each other. For us it’s like, ‘Oh, let’s have sex.’ And then we’re just right back in a great mood.”

It's not just about sex, of course. Graham told People that she and Ervin prioritize date nights together every week to keep their relationship strong. "That has been something that's been really great, because 24/7 it's about Isaac and we're both working parents now, so we need that extra time for ourselves that we used to have all the time," she told the magazine.

Graham doesn't have all the answers for everyone, of course, but she seems to have figured out what works for her marriage. Sex and date nights — doesn't sound so terrible.