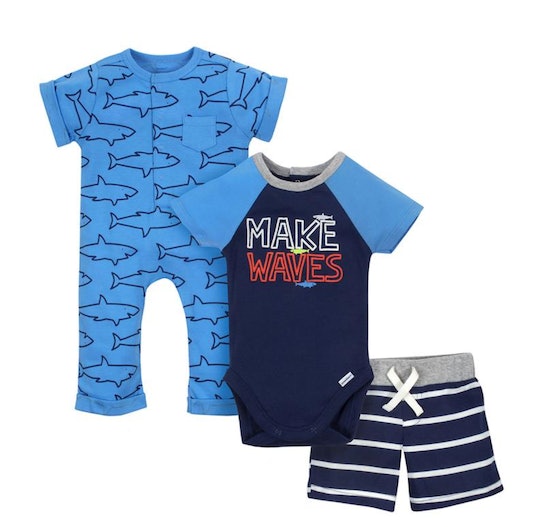 Ever since the evil geniuses at Pinkfong released their hit video "Baby Shark," there has been a wealth of stuff released to capitalize on the fishy fervor. From books to stuffed animals to puzzles and more, most of it is absurdly cute. And now there's shark-themed clothing from Gerber, America's quintessential baby company, to add to the list. Once you see it, you'll agree: These outfits are the perfect expression of your child's love of Baby Shark... they even have tiny little fins on the backs! .

Gerber has been around since 1867, when pharmacist Henri Nestlé began looking for ways to feed a baby who could not breastfeed, according to the Gerber website. Eventually, the development of formula and the production of bottles led the people at Gerber to expand their products to encompass many of baby's needs — including clothing. Now, they have everything from burp cloths to baby blankets to tiny infant onesies, and their designs gets cuter every day. These shark suits and tops are some of their most adorable pieces of clothing to date, even if it makes that song run through your head over and over again. It'll be worth it once you see the miniature fin on your baby's back, trust me.

I don't know a parent of a child over the age of two who can't sing the entirety of the "Baby Shark" song to you. It's that pervasive in our culture right now, and it doesn't show any signs of slowing down. Especially given the fact that Pinkfong is in the process of putting a show on Netflix, as Scary Mommy reported. We're in deep water with this one for a long time, parents, so it's best to get chummy with the idea, now. It's a Baby Shark world, and we just live in it... do do do do do do.

As for the adorable shark-themed clothing at Gerber, it's more than just a nod to Baby Shark, it's precious all on its own. Personally, I can't think of a parent who didn't clothe their child in Gerber onesies as newborns and infants. Their tee shirts are as ubiquitous and welcome as the face on their campaign. We feed our babies their food, clothe them in their designs, and let them rest upon Gerber bedding. It's a brand we trust that is now making clothing we want our children to wear. It's honestly the best of both worlds. Plus, nothing on the clothing sings the song, which is a win.

I will admit that I am at the point where when I hear my kids start to sing the song, I run headlong in the opposite direction until my hearing aids no longer pick up the sound. (It's one of the true gifts of deafness — the ability to just turn off whatever I don't want to hear.) But I will admit that if my son were just a bit smaller, I'd put him in these baby shark outfits so fast your head would spin. And then I'd hum the theme to Jaws as he scuttled around crawling over my floor. Because that was the shark obsession of my youth. When I first saw that movie on cable, I never wanted to get in the ocean again.

Now, not only could you hum Jaws, but you could also spin around with your child and be on the lookout for Ian Ziering, because you have made yourself a baby sharknado. And you know what that means — yep — you're going to have at least four more sharknados before it's all over, so you better order more of Gerber Baby's new shark line of clothing, because you're going to need it.