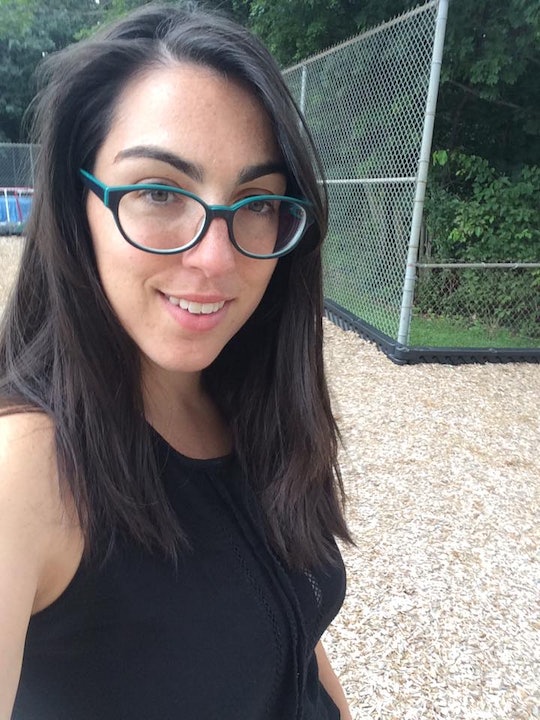 Becoming A Mom Made Me Even More Pro-Choice

The 2016 election has taught many of us just how much we can hear before we refuse to remain silent. Giving in to a growing sense of dreadful urgency, we do what our less-inhibited family members have been doing for years: we post our unfiltered opinions. After I shared a video stressing the importance of supporting Planned Parenthood, an offended cousin messaged me. She (politely) bombarded me with anti-choice talking points before she finally went there: "You're a mother: Can you imagine aborting your babies?" When I told her that becoming a mother made me even more pro-choice, she immediately asked me what I could mean by that. I was busy (and, frankly, not on the mood) and didn't respond. Besides, the answer to that assertion is not a short one. How could I begin to list all the reasons becoming a mother deepened my commitment to a woman's right to be in control of her reproductive health and family planning?

In a survey of 584 millennial moms across the country put together by Romper, 43 percent noted that their views had changed since becoming parents. Participants noted the change in political views to the fact that they have "more family-oriented views" as parents and that they care "more about traditional values" since having children, while others noted that even though they were "more pro-choice" before having kids, they're "now more pro-life" as parents and "less inclined to agree" with abortion rights. Others shared that they're "against abortion" completely. While becoming a mother and raising my children has not fundamentally changed me, it has given me new perspectives and deepened others. The question of reproductive rights is among them. Having babies has highlighted how precious they are, how much of us they deserve, and how much we owe it to them to be our best as parents.

Throughout history, women's bodies have been used as a means to political ends — if you don't believe me, just ask Helen of Troy. Indeed, the origins of the "pro-life" movement we know today were largely a Conservative political reaction against larger feminist and Progressive agendas in the late-'70s and early-'80s. Evangelical Christians, for the most part, were uninterested in fighting against abortion rights until it was tied to other issues via the "Moral Majority," a political organization founded by Jerry Falwell in 1979 formalizing the alliance between the Republican party and conservative Christians. Today, as a result of this persistent politicking, abortion and reproductive rights hang in the balance (and are a central issue) in every national and state election. Growing up, raised by strong Catholics who were even stronger Democrats, I sincerely believed in a stance I've heard many times since: "I'm personally against abortion, but I believe in a woman's right to choose."

From the time I was old enough to know what an abortion was and why people got them, I knew this was not a right that should be taken away. I knew a child should not be forced to carry a pregnancy to term, nor should a rape victim, nor a woman whose life depended on termination or whose baby would be born only to live a brief life full of pain. But I was still coming from a long line of Catholics (a demographic, incidentally, who had been mobilized against abortion since Roe v. Wade, long before the Evangelical adherents who are now synonymous with the political movement). I found abortion either tragic or distasteful or both, and my pro-choice stance was specific, not a little judgmental, and unenthusiastic. I knew this was a choice that should be allowed, but it should be reserved, I felt, only for the most dire of circumstances.

Still, my mantra remained largely the same: "I'm personally against abortion, but I believe in a woman's right to choose." Then I got pregnant.

As I got older, read more, and drifted both naturally and intentionally from my Catholic moorings, I softened in my stance. I grew more compassionate toward women who chose abortion. I saw the pro-life movement for its anti-choice origins and political ends. I recognized the "Acceptable Abortion" and "Immoral Abortion" categories I'd constructed in my head were not as clear-cut as I'd once imagined or been taught. But still, my mantra remained largely the same: "I'm personally against abortion, but I believe in a woman's right to choose."

Then I got pregnant. And even though each pregnancy was welcomed and happy and abortion was the last thing I could have wanted, something changed in me almost overnight. My reasons were varied, but ultimately they all came down to looking at abortion and family planning now through the eyes of a mother.

If I could feel this way, someone who wanted a baby, who was happily partnered, who had room in her home and heart and life, who had support, who had a name for her baby already, how horrifying must pregnancy be for someone who was not in that situation, who had none of those things, who had been raped, who was all alone, or who could die? No one, ever, should be forced to feel this way for 40 (or more) weeks.

What struck me the most in the first trimester of my first pregnancy was the strength of two feelings I did not expect. The first was invasion. From just before I found out I was pregnant at six weeks through delivery, my body felt completely outside of my control. And, really, on the most basic level, that was true; so much of my physical energy was spent on growing and sustaining another entity. But the sense of invasion ran deeper than that, and though I was willingly and happily pregnant, the feeling was often disconcerting and upsetting (both in and of itself and, in my case, feeling upset and disconcerted that I did feel upset and disconcerted). I felt haunted by my pregnancy — someone I could only sense was somehow permeating every aspect of my life, rearranging things, who was keeping me up at night and occupying most of my waking thoughts. Days after finding out I was expecting and countless times thereafter, I remember thinking, How could anyone live like this if they didn't want to? What would that to do them?

The first time I thought this I was in my kitchen preparing dinner, and the question itself, with the answer obvious but unspoken, peeking just behind it, bowled me over. I abandoned the food, retreated to my couch and cried. If I could feel this way, someone who wanted a baby, who was happily partnered, who had room in her home and heart and life, who had support, who had a name for her baby already, how horrifying must pregnancy be for someone who was not in that situation, who had none of those things, who had been raped, who was all alone, or who could die? No one, ever, should be forced to feel this way for 40 (or more) weeks. I'd always sort of known this, but the first-hand experience made me understand it in a way I couldn't before.

The second overwhelming feeling was ferocity. I expected to love my baby from the instant I knew they were inside of me. But I didn't, at least not in the way I'd thought I would. What I did feel was more primal than love. I imagine it's the instinct from which love is ultimately born. It was animalistic and raw. I felt the need to protect this nascent human however necessary. And the care with which I moved around the world wasn't born of a sense of fear, but of ferocious protection. Then, once my children were born, that feeling only intensified.

I am not and have never been a violent person, but I've vividly imagined bloody, horrifying scenes as I wondered what I'd instinctively do if someone tried to harm my son or daughter. Tearing scalps. Breaking bones. Sinking my teeth into the flesh of their faces. I cringe to see someone get a needle, but I don't so much as mentally wince thinking about tearing a hypothetical predator limb from limb if they were to make my children suffer. One might think this would translate to fervently fighting against abortion, but no. Because as their mother, I'd do anything, no matter how painful it was to me, to keep my children from suffering. And sometimes, before a child is born, their fate is one of endless, horrible suffering. Suffering from a disease, suffering from miserable poverty, suffering from abuse, suffering only to die shortly after being born — these are each things I instinctively know I'd do anything to protect them from, no matter the emotional burden it was on me. That's why mothers deserve a choice.

Women deserve the dignity of self-determination; seeing myself in my children, knowing I could help shape something so amazing, has helped me see more clearly that I am worthy in and of myself.

And even though this was something I'd espoused before I had children, I am committed more now than ever that motherhood should always come as a choice to those ready and eager for it. Because as a mother, I know what it means to love a child so wildly and primitively you can look at them and cry. I understand that for all our children require of us, we want to give them pieces of ourselves we haven't even discovered yet, pieces we find just for them. I understand the work, the weight, the relentlessness of it all. The responsibility is among the greatest joys and challenges a person can face: it cannot, and should not, be undertaken lightly or under duress. And a woman should not be forced into that decision by her government or by those around her. Women deserve the dignity of self-determination; seeing myself in my children, knowing I could help shape something so amazing, has helped me see more clearly that I am worthy in and of myself. In turn, children deserve to be welcomed into the world by a mother who knows and believes she is capable of all this: someone who is willing to undergo the tremendous, often painful, and wonderful work of being a parent.