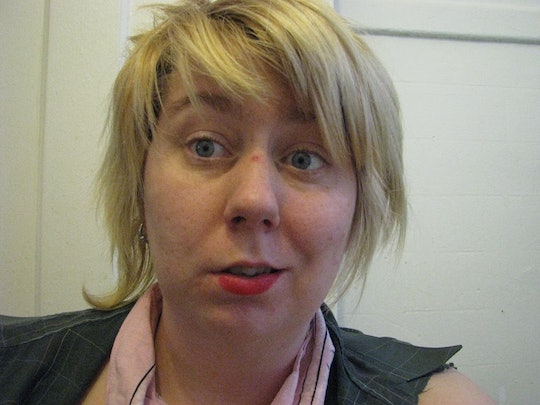 Being A Mom With Insomnia Makes Parenting Totally Impossible

Everyone and their brother knows that one of the harder parts of parenting is sleep deprivation. Babies and very small children often wake in the night, and that results in loss of sleep for parents, which can make literally every other part of life more difficult. But what about for those of us who were already suffering from insomnia before we had kids? I've had trouble falling asleep and staying asleep for nearly as long as I can remember, and adding a baby into the mix has meant new — and totally overwhelming — challenges when it comes to bedtime.

I started having trouble sleeping when I was a little kid. I was terrified of the dark, and I was generally fearful and wakeful when I was supposed to be asleep in my bedroom. All those clichés about kids who believe in monsters under the bed were a huge part of my life, but I took it to new levels. What if the wicked witch of the west was right outside my bedroom window? What if the floor was made of snakes? My overactive imagination latched itself onto any idea that would give me a good reason to jump out of bed, because being in bed when you can't sleep and your head is spinning with anxiety is the worst. And none of that went away in adulthood for me. Maybe the things I stayed up thinking about were different, but the basic pattern was the same: There I'd be, a fully grown independent woman, laying in bed worrying about any number of things (what if I lose my job? what if there's a gas leak and I just didn't notice? what if I have cancer?) and just hoping I'd fall asleep before the alarm clock said it was time to wake up.

When I can't sleep, it's not like I'm in bed relaxing and I just don't happen to doze off. No, it's more like I'm in bed trying to doze, but my heart is racing and my body is tense. I feel like something is about to happen, like at any moment I'll have to spring from the bed and run across the house to do... something.

Though I've tried to establish a good bedtime routine for myself, and I've tried following all the standard advice for insomniacs (such as no screens before bedtime, etc.) nothing seems to work for me. Sometimes I get lucky and I manage to sleep almost normally, but it's just that: luck. And it never lasts very long.

My insomnia comes and goes in waves. But when it's here, boy, is it ever here. It can take over my entire life. When I can't sleep, it's not like I'm in bed relaxing and I just don't happen to doze off. No, it's more like I'm in bed trying to doze, but my heart is racing and my body is tense. I feel like something is about to happen, like at any moment I'll have to spring from the bed and run across the house to do... something. But I also know that that feeling is completely wrong, so I force myself to stay still, and tell myself that everything is fine and it's bedtime and that I just need to relax.

My relationship to sleep, just like everything else in the universe, changed when I became a parent.

You get the idea.

All of that is plenty challenging enough all on its own, and I've made it through many a day on nothing but coffee and good intentions, quoting lines about insomnia from Fight Club to myself in my head, but my relationship to sleep, just like everything else in the universe, changed when I became a parent.

And the intersection between a night-waking baby and an insomniac mother can be utterly hellish. On nights I'm having trouble sleeping, everything is impossible. Sleep becomes this bizarre elusive thing that's always out of my reach, and what tiny bit of sleep I'm able to manage is almost always interrupted, broken up into tiny chunks so small they feel totally useless. It's even more difficult than usual to fall asleep, because added to all of the usual worries is the thought that as soon as I doze off the baby will wake me up anyways. Then, if I do manage to fall asleep, and he does (of course) wake me up, it might take me an hour or more to fall asleep.

After two or three days in a row like that, I don't even feel like a human being anymore. I find myself crying over tiny things, or over nothing at all, and wondering when I'll ever be able to catch up and if I'll ever feel normal.