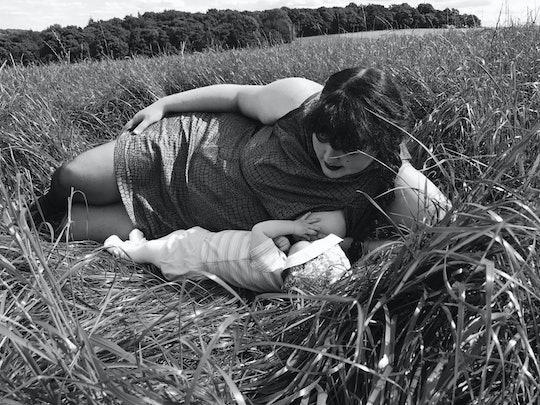 When my eldest daughter was eight months old, we took the train into the nearest city for little daytime getaway. I nestled into the only available two-person seat, which was adjacent to a young couple. About 15 minutes into our journey, the baby needed to nurse. Breastfeeding in public as a plus-size woman had proven difficult for me since Luna was born, but I always tried to push through any anxiety. On this day, I did just that — but I also received concrete proof that my anxiety had been justified all along.

"F*cking disgusting," I heard my male neighbor mutter to his partner while clearly pointing in the direction of my exposed breast. "I don't want to look at her fat tits. Is there anywhere we can move so we don't have to watch the whale?" He raised himself up to get a better look of the coach. Upon realizing there was nowhere to go, he kept the insults coming instead (his girlfriend quietly giggling along without adding her own thoughts to the conversation).

I kept quiet for the first few minutes, unsure of how to handle the situation. Thanks to fat liberationists, I've felt comfortable and happy in my body for years. Words like "fat" or "whale" hardly offend me (in fact, I happily self-identify as both). I've also gotten better at standing up for myself in the face of trolls. On a packed train with my daughter glued to my chest, however, I really didn't want to further fuel a scene. Until he said a little something else: "I feel sorry for that kid, with a mother like that."

"Excuse me," I interjected. "What is it you feel sorry for, exactly?"

He was taken aback, clearly not expecting me to engage him, but he managed to mutter something about how despicable and grotesque the sight of a fat-ass pulling out her boobies on public transportation is.

"So, out of curiosity, would I be allowed to feed my baby in your vicinity if I was thin?"

"If you were thin, you wouldn't be such a pile of garbage, would you?"

"So, I'm supposed to let my baby starve because fat bodies offend your delicate sensibilities?"

At this point, he was clearly fed up. He told me to "f*ck off," I asked his partner why she was with such a d*ckhead, and they quickly made their way through the dividers and into the next section of the train. Although I have no experience breastfeeding in public as a thin woman, this exchange reified my fear that breastfeeding in public when you're fat is even more negatively received than doing so when your body is culturally deemed "acceptable."

Existing in a fat body can sometimes feel like a paradox. You are all at once hyper-visible and invisible. When you take up a certain amount of physical space, you are typically dehumanized on the regular, examined as an "epidemic," and (all too often) wholly disrespected by strangers, relatives, peers, health professionals, and mainstream media alike. At the same time, however, you are ignored. You aren't listened to. You aren't looked at, treated with kindness, or asked to join in. You are either over-sexualized or entirely desexualized. You aren't thought of as worthy of basic human decency.

I don't believe I have ever once seen a fat woman breastfeeding her child out in the open.

Much of this is thought to come down to a lack of nursing support in the healthcare system (largely due to budget cuts), but a lot comes down to social reception, too. As Kate Quilton, first-time mom and presenter of the 2018 documentary Dispatches: Breastfeeding Uncovered, told The Independent, we are seeing these statistics because mothers "don’t feel confident, they don’t feel like they can go out and breastfeed in public despite the fact that it is law that women have the right to breastfeed anywhere in this country [...] Culturally it still feels like we’re a fair few decades behind and people do struggle with it.”

When pushed to examine my surroundings, it's true that breastfeeding in public is not as standard in Britain as it seems in other Western countries. Whenever I have seen women nurse in public here, however, they've always been thin. Actually, I don't believe I have ever once seen a fat woman breastfeeding her child out in the open, and I truly think that this is because we'd be making ourselves vulnerable to two types of prejudice: that against women who nurse in public, and that against people who dare to exist in a fat figure.

Now, as a mother of two (onto a second round of nursing), I've felt this other clap-back: Fat girls shouldn't nurse in public. I feel it when people stare me down; when they subtly or not-so-subtly point in my direction while I'm nursing and whisper something to their friends; when they cannot seem to fathom why I'd allow a body like mine to be even more on-display.

I spent much of my life believing that I would remain unworthy of romantic, exploratory, or sartorial experiences until I sufficiently shrunk my body. When I look back upon that time, I am consumed by regret. I could've done so much, and seen so much, and made so many memories if I had just allowed myself to live in the body I had.

As an adult, I know that fat girls actually can. There is nothing we should be deprived of because our bodies don't align with some contrived ideal of beauty or worthiness — and that includes feeding our children.

Despite the sexualization and inherent negativity surrounding nursing in public, there is nothing inappropriate about it. There could never be anything "wrong" or "disgusting" with ensuring that your child is well taken care of. For those who choose to nurse, it can be an incredibly beautiful experience when all that other BS is tuned out. For those of us who can and choose to nurse when fat, it can also be an opportunity to remind ourselves that our bodies are capable of just as much wonderment as anyone else's. We have every right to embrace that fact on the bus, or the beach, or the mall, or on a train.

More Like This
How To Breastfeed A Baby With A Cleft Lip Or Cleft Palate
6 Ways To Fix A Shallow Latch So Your Baby Can Nurse Properly
Stop Talking About Formula Feeding Like It’s Always A “Last Resort"
Breastfeeding Twins: Everything You Need To Know