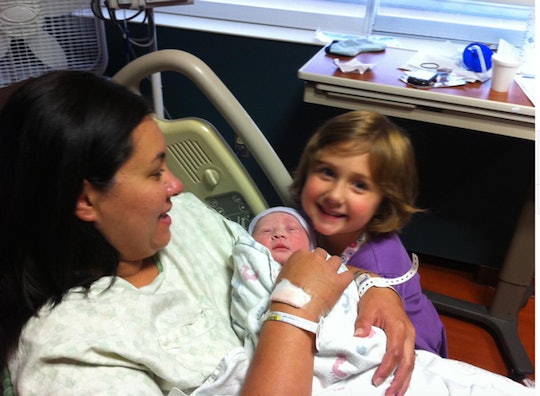 Life didn't feel the way I thought it would after my son was born. From my high-risk pregnancy to my traumatic labor and delivery, every experience involving my second child felt different. I guess I shouldn't have been surprised when leaving the hospital felt peculiar, too. In fact, I've never felt more lonely than when I brought my second baby home, and I was as disheartened as I was unprepared to handle it.

When you have your first child, people are there. They shower you with anything you could ever want and need. They praise you. They worship you. They support you. Hell, sometimes they smother you with their love and affection and intrusive questions. It's exciting and overwhelming and even when you're exhausted you feel seen. By the time you give birth, you know you can rely on the presence of others when you feel sleep deprived, confused, and in over your head. Life as a new mom is a whirlwind of change and adjustment, to be sure, but you usually have people there; people who are invested; people who are more than happy to help.

I'm thankful for the support I received as a new mom and at a time when I really didn't know what I was doing, don't get me wrong. But everything changed when I finally became pregnant with my son years later, and I have to admit that I've never felt that initial level of love and support since.

After I endured two miscarriages and started considering fertility treatments, I became pregnant with my second child. He was a pleasant surprise, without a doubt, but the pregnancy was labeled high-risk so I knew things weren't going to be "easy." I spent the entirety of my pregnancy living in fear; afraid that I would lose the chance at having another child... again. And after a traumatic birth that almost killed me and my son, that fear was almost realized.

I needed help and support and time to heal, but instead I was focused solely on my son and his wellbeing while everyone around me assumed I was OK because, well, I had done this before.

So going home with my little boy was a strange feeling. He was no longer an idea or a wish or a sometimes seemingly far-fetched dream. Instead, and finally, he was a real, living, breathing human who I was responsible for. I threw myself into caring for him and focused all my energy on him and keeping him safe and alive; a decision that I later learned was a result of my birth-related post traumatic stress disorder (PTSD). I needed help and support and time to heal, but instead I was focused solely on my son and his wellbeing while everyone around me assumed I was OK because, well, I had done this before. After all, this was my second child.

When my son and I were finally released from the hospital, I went home to loads of laundry in need of cleaning, no food in the refrigerator, and an overwhelming sense of "now what?" and as my daughter, 5 at the time, needed a mom, too. There wasn't a big "welcoming party" or a line of friends and family members asking to help or babysit or drop off frozen dinners. I wasn't the "new mom" anymore, so people seemed content to leave me and my now-family of four to our own devices.

I was lonelier than ever, trying to navigate the aftermath of a high-risk pregnancy, an almost fatal birth, and caring for a newborn I was still terrified was going to die.

It was a struggle to get through the first few weeks of life as a mom to two children, to say the least. My anxiety worsened to the point that I couldn't leave my son for more than a few minutes at a time, so I didn't go outside to visit friends or see family or have a meal by myself. As a result, people stopped inviting themselves over or inviting me out. I was lonelier than ever, trying to navigate the aftermath of a high-risk pregnancy, an almost fatal birth, and caring for a newborn I was still terrified was going to die.

I can't really blame my friends or family members, though. In all honestly, I isolated myself out of fear. But I'd be lying if I said I didn't (and to a certain extent, still don't) resent people for not trying harder. Wasn't it obvious that I needed help? Couldn't the at least assume that a postpartum woman would be struggling after a traumatic birth? Couldn't they see that a baby doesn't automatically erase years of pregnancy loss, fertility struggles, and a high-risk pregnancy?

Now, over six years later, I've gained some perspective. I know that our culture's collective and unrealistic expectations of new mothers played a roll in my isolation. I know that while parents need time alone to bond with their babies, new-parent life is lonely and knowing you have a tribe around you to help you, support you, and believe in you makes all the difference in the world. I know we are not meant to raise children alone.

I also know that it's OK to ask for help. And I know it's Ok to still struggle being a mom to two children, because this isn't easy in the slightest. I know it's alright to doubt yourself and be afraid and wonder if you can handle it all, especially for a second time and especially after some heartache. Because even when you feel like you're alone, you're not.