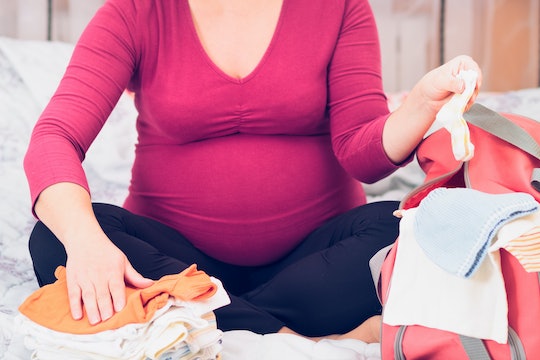 12 LOL Things I Put In My Hospital Bag

When I was pregnant with my first child, I became a regular on a pregnancy message board for parents who were also due in Sept 2011. One topic kept coming up over and over again around March, and continued to be discussed until the last of our babies was born in mid-October: "What are you packing in your hospital bag?" You know, the one you're supposed to pack ahead of your due date so your always ready to head out at a moment's notice. The things I put in my hospital bag make me LOL now. Not in a mean way, just, you know, a LOL of experience.

First of all, the mental energy spent on one's hospital bag is usually so disproportionately enormous compared to how important it actually is. You need two things to have a baby the hospital does not have on hand — you and a baby in your ever-expanding uterus. That's it. Anything extra you may or may not need later, you can get later. While it seems like a huge deal at the time, I can assure you that hospital bag isn't a huge deal at all. Plus, that "extra" stuff? You're probably not going to actually need, want, or use it.

Still, overpacked hospital bags are extremely common and something we can all have a good chuckle about afterwards. My own hospital bag, honestly, was modest compared to some, but I still had a ton of stuff I did not need at all. For example: