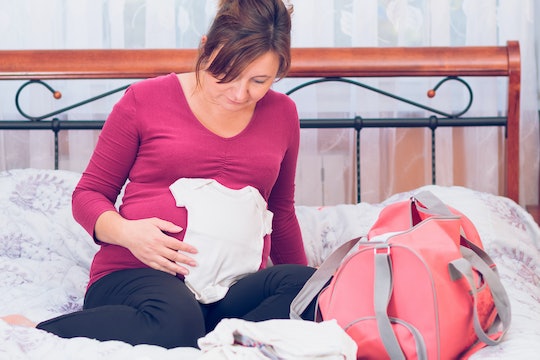 13 Things Your Baby Is Thinking About Your Overpacked Hospital Bag

I can admit it, I was a bit lackadaisical about my hospital bag. Though, even with my ambivalence towards that bag, I know I still overpacked it. I know it was overpacked because the majority of things in there were not utilized a single time during my hospital stay. I can only imagine, had my baby been able to process what was happening as I packed, that he would have been amused by the whole process. In fact, I can imagine a few things a baby thinks about an overpacked hospital bag and, thanks to said imagination, something as simple as a packed "go time" hospital bag can be really, really entertaining.

Perhaps it's because we lived about three minutes from the hospital or, perhaps it's because I was so overwhelmed by the thought of giving birth that things like pajama bottoms felt irrelevant. In the end, though, I think it was probably because I took great comfort in knowing that all over the world, women give birth without a fully stocked hospital bag at their side, so surely it wouldn’t be a deal-breaker if I forgot something, right? I had enough to worry about and decided to focus on those things, instead of the bag that would sit by my door and taunt me during the end of my pregnancy.

Would my baby really care if he had a lovey from home, or a blanket from his nursery, instead of what was provided for us and available at the hospital? I mean, I don’t have a way to ask him since my son definitely doesn’t remember that day, but I suspect no. Here’s a few more things I suspect he might have felt about that bag: